How does the VA rate Veterans Parkinson’s Disease? 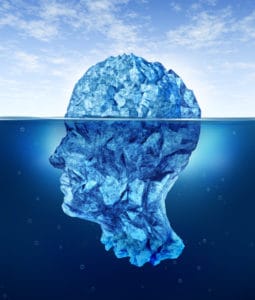 4 years ago, I started working with a Veteran who suffers from Parkinson’s Disease.  In the course of working with this Veteran, I have come to know not only a great man, but a lot about the condition that affects him.

The condition is very much like iceberg, in many ways.

There are the ways that it visibly impacts a Veteran – above the surface, everyone can see the Parkinsonian Gait, the tremors, and the other physically visible signs.

But below the surface lurk many more ways that a Veterans Parkinson’s Disease affects his/her mind, body and spirit.

More than that, though, I have come to know how often the VA misses the boat on establishing the proper rating for a Veterans Parkinsons’ Disease.

Why is Veterans Parkinson’s Disease such a Common Diagnosis?

My client – who served in the Philippines during the Vietnam War – was diagnosed with what is informally called “Young-Onset Parkinson’s Disease” – at age 31.

The diagnosis of Young Onset Parkinson’s  is a frighteningly common occurrence in the Veteran community.

Beyond that, traditional onset Parkinson’s is increasingly common in the Veterans community. I think there are 2 major reasons (and a host of minor reasons that I won’t go into in this general post).

Here is one of those minor reasons: science is showing us more and more that there are early indicators for the diagnosis of a Veterans Parkinson’s Disease: the VA Pacific Islands Health Care System concluded that individuals who have lost their sense of smell are 5 times more likely to be diagnosed with Parkinson’s Disease in the future.)

The First Major Reason for the increase in Veterans Parkinson’s Disease is that so many Vietnam era Veterans were exposed to dioxin during their military service.  (Dioxin is the primary chemical compound in Agent Orange).

The VA has conceded in the past that Veterans exposed to Agent Orange have a 70% greater likelihood of being diagnosed with Parkinson’s disease.

In fact, Veterans who served boots on the ground in Vietnam (or with qualifying Thai or Korean DMZ service during the Vietnam War) are entitled to a presumption that the Veterans Parkinson’s Disease was related to their military service.

The Second Major Reason – this one heavily impacts the current generation of combat Veterans – is that TBI is a known causative factor in Parkinson’s Disease.  Given the nature of combat in Iraq, Afghanistan, Somalia, etc., very few Veterans escape combat service without a TBI – or Traumatic Brain Injury.

(A TBI is a closed-head injury – over-simplified, a TBI is essentially a blow or concussion that shakes the skull and in some way damages the protective layer between the skull and the brain).

Well, it happened just as I predicted.  As of January 14, 2014, Veterans who are diagnosed with a TBI may be entitled to a presumption tthat the TBI was the cause of the Parkinson’s Disease.

The VA now concedes the causative connection between TBI and Parkinson’s, and has recently added a regulation that, in certain circumstances, acknowledges that a moderate or severe TBI can cause or aggravate Parkinson’s Disease.

There are 4 Pillars that need to be proved in every original service connection claim .  Very briefly, they are: Eligibility, Service Connection, Impairment Rating, and Effective Date.

By the way – did you know that the Veterans Law Blog publishes the definitive guide for Veterans that want to prove these 4 pillars in their VA Claim?  You can take a look at the 5+ hour Training Video here – there is no other resource that has more information about HOW to prove the 4 Pillars of a VA Claim than this video. 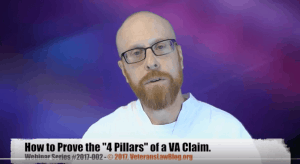 Veterans with Parkinson’s Disease must prove each of these 4 Pillars to prevail in their claim for service connection.

Typically, the 1st and 4th elements are the easiest to prove: eligibility and effective date.  When it comes to proving Service Connection of a Veterans Parkinson’s Disease, or establishing the impairment rating for that condition, the journey can be a little harder.

There are 5 Paths to Service Connection – I encourage Veterans with Parkinson’s Disease to use as many of the 5 Paths as they can.

A Veteran is not restricted to choosing only 1 path in their VA Claim.

If you would like to learn more about the 5 Paths to Service Connection – as well as other information that isn’t published anywhere else on the internet – be sure to check out the 5 hr training video: How to Prove the 4 Pillars of a VA Service Connection claim.

There’s 2 reasons for that.

Second, Parkinson’s is one of those conditions that can have a LOT of residual symptoms ; it can affect every part of your nervous system:  from information processing speeds, to gait/walk, speech, use of arms/hands, inability to process smells/odors, etc.

In the worst cases, we see Veterans with dementia that results from Parkinson’s Disease, too.

So, how do you make sure that the VA properly rates your Parkinson’s Disease.

Step #1:  Do you have ascertainable residuals of Parkinson’s Disease?

If yes, then you must receive a minimum 30% rating under Diagnostic Code 8004 (Paralysis agitans).

What is an ascertainable residual?

A very basic explanation is that an ascertainable residual is a symptom you can see or that are capable of lay observation.  Things like gait, tremors, speech, loss of smell, dementia, et cetera.

Which brings us to the next Step.

Each objectively verified residual of Parkinson’s Disease (and some subjective ones) are then rated separately.

Using VA Math, the Ratings are then  combined with the 30% rating to yield an overall rating.

This is something that most Veterans don’t know about how the VA Rates Parkinson’s disease.  You can dramatically affect the rating you receive by including a lot of lay evidence of these observable symptoms in your claim.

Lay Evidence is the magic bullet in VA Claims, and if you don’t know how to submit competent and credible Lay Evidence in your VA Claim, then you are missing out on a powerful tool.

Because Parkinson’s is such a debilitating and rapidly progressing disease, most Veterans that have service-connected their Parkinson’s Disease should be looking to see if they qualify for Special Monthly Compensation (SMC), for things like assistance with daily living, loss of use of an extremity, loss of use of a reproductive organ, loss of use of one of your major senses (sight, hearing, etc).

Last thing, before I shut this post down…if a diagnosis with Parkinson’s Disease catches you off guard and rattles you, consider this young man’s story: Jorge Lacoste is an inspiration.

Step #4: Don’t forget TDIU if the  Veterans Parkinson’s Disease precludes his or her ability to work.

Young Onset Parkinson’s is typically accompanied by a longer and slower decline in physical and mental capabilities than traditional onset.

However, if a Veterans Parkinson’s Disease limits their ability to engage in substantially gainful activity, that Veteran should definitely consider applying for a 100% rating – regardless of the rating for  the Veterans Parkinson’s disease – based on Total Disability/Individual Unemployability.

These types of claims SEEM easy, but often require that a Veteran understand:

* What Forms to use to properly file a TDIU claim

* What the different types of TDIU are, and how to prove them

* The difference between TDIU and a traditional extra-schedular rating

* The definition of “substantially gainful activity”

* The Easy Way To Get your VA TDIU Claim denied.

I have written a book – again, the only one of its kind out there published by a lawyer with almost a decade of experience fighting the VA in these sorts of claims.

You can buy the TDIU book individually here, or save money by buying our TDIU Guidebook Bundles.

A Word of Motivation, if you are dealing with a Veterans Parkinson’s Disease.

May I introduce you to the client that I discussed above?  He has a message for you, if you are a Veteran diagnosed with Parkinson’s Disease.  That message is this: “If it’s Broke, Don’t Fix It”.