I promise this post is about competent and credible lay evidence. But let me start with a story.

Some time ago, I was out for drinks with a particular friend who was, and still is, a big fan of a mixed drink with 2 ingredients:

Something he said about why he liked that drink stuck in my head: “I can’t get enough of this drink – it really gives me Wings.”

That got me thinking: competent and credible lay evidence in a VA claim is like red-bull and vodka was to my friend:  It will give you wings.

I found myself asking the same question about lay evidence that my friend asked about red-bull & vodka drink:

Why doesn’t everyone use MORE Lay Evidence  in their VA Claims?

This Veteran Learned How POWERFUL Competent and Credible Lay Evidence Can Be in a VA Claim.

You combat vets are going to love this story.

The veteran in this CAVC appeal was injured in a “horse-play” incident – a fellow soldier punched him in the shoulder numerous times with a closed fist.

The veteran believed this injury was what caused his shoulder disability.

Okay, combat vets, grumble away – you’re struggling to get service connected for a gunshot wound or TBI, and this guy likely just won his claim for getting hurt playing “Two-For-Flinching”?

Ignore that for a moment…focus on what I am going to tell you now.

That makes sense, doesn’t it? How many Vietnam veterans hid an injury to avoid medical treatment that might extend their DEROS (Date Eligible to Return from Overseas Service) and require them to be away from home that much longer?  I was the same way – I couldn’t get out of the Army fast enough; I was excited about the civilian life ahead of me, and talking about the things that happened wasn’t something I was going to slow me down.

So you have a veteran with a shoulder injury, and a plausible reason for no medical treatment. He alone testified to what happened, using “lay testimony.” And the BVA found him to be a competent and credible witness, and accepting his explanation.

Should have been enough right?

No, but not because the veteran did anything wrong. Even though he gave credible & competent testimony as to the reason he did not seek treatment for his in-service injury, and even though his testimony as to the in-service incident (the “horseplay” game with other soldiers), the C&P examiner found that there was “no evidence” of a service treatment record for an injury of this nature.

SCREEEEEECH.  (That’s the sound of a needle scraping across a record player.)

What did the C&P Examiner say?

Not  only that…. it breaks 2 very clear rules of VA claims processing:

1) The absence of evidence is not NEGATIVE evidence.  Just because you can’t prove that something happened does not – in a VA claim – mean it didn’t happen.

2) If you offer 5-Star Lay Evidence – probative, material, and relevant evidence that is competent and credible lay evidence – the VA MUST consider it.

Bottom Line: If you are missing proof in your VA Claim, Get Competent and Credible Lay Evidence.

In the end, the veteran likely won – he certainly won at the CAVC. Here is the essence of the Court’s ruling over-turning the BVA denial of service connection:

“Of course there is no record of treatment in service: a competent and credible witness said that there would not be”

In light of this decision, we can add one more rule to the above list:

If you don’t have evidence that something happened in-service, fill the “gap” with competent and credible Lay Evidence.

Like the Veteran in this case, it will give your VA Claim “wings”.

Learn HOW to fill that gap by checking out the VA Claims Evidence Field Manual: 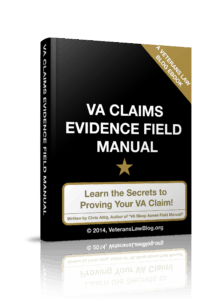