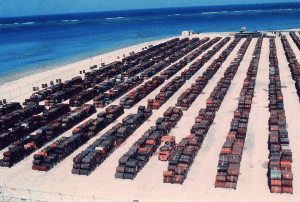 I’ve often said that Vietnam era Veterans that were exposed to Agent Orange in Thailand are the “orphans” of Agent Orange claims.

The only folks that get a worse deal from the VA are the survivors of Vietnam era Veterans that served on Royal Thai Air Bases who also get royally screwed by the VA.)

Of all the places where the US has conceded that it doused its own soldiers in Agent Orange,  these Veterans have it the worst.

Until May 2010, in fact, there was really no reliable path to proving to the VA that you were exposed to Agent Orange while serving at a Royal Thai Air Base in Thailand during the Vietnam War.

The VA released a Compensation and Pension Service Bulletin that allowed presumptive service connection of diseases associated with herbicide exposure for Veterans that served on certain Thailand bases during the Vietnam War.

[s3file s3url=”candpmay2010.pdf” ]Click Here to Download a copy of the May 2010 Agent Orange Thailand Exposure VA Compensation and Pension Bulletin in a PDF file.[/s3file]

Here are the basic “rules” to get the presumption of Agent Orange exposure if you served in Thailand during the Vietnam War:

Many Veterans do not fall into the security police or dog handler MOS – and were still exposed to Agent Orange.  The VA expects a little more proof from them – though the rule doesn’t require it, as a matter of practical reality that’s how it works out.

By the way, there are a lot more bases in Thailand where Vietnam era Veterans were stationed: Ramuson is one that comes to mind.

And then there were those troops that weren’t assigned to a base in Thailand so much as they built roads for military (and civilian) travel throughout the areas of Thailand where the US Military was operating.

Understand, before you submit evidence, that you will need to submit competent and credible evidence so that the VA can establish a presumption of Agent Orange exposure on a Thailand Air Base on a “facts found basis”.

With that understanding, here are some ways you can submit to prove you were near the perimeter of a Thai Air base – remember, the more the better.

I have not yet seen the VA grant presumptions of Agent Orange exposure based a single statement of a single Veteran.

These are not the only ways to skin this cat.  Think “outside the box”.

You don’t need to prove you saw, touched, breathed in, drank, or swam in dioxin laden water to prove Agent Orange Thailand Exposure.  You need to provide enough evidence to persuade the VA that it was ‘at least as likely as not’ that your duties put you on the perimeter of a Thailand Air Base where Agent Orange use is conceded.

1) Produce a copy of your MOS/position description.

Pull your actual MOS off your service records, and then google search for a copy of the position description that was in effect during the time of your service in Thailand.

Many of these MOS Position Descriptions show that a key performance duty was "patrolling the perimeter" or some such language.

2) Track Down Your Performance Reviews.

If you are fortunate to have performance reviews in your military records, scour them for any language that suggests that part of your job included base security or perimeter duty.

One of our clients was commended in his performance appraisal, for the work he did guarding the base commander from snipers while driving him around the perimeter once a week.

I cannot count the number of times that I have seen a performance appraisal that relates the story of a Veteran's willingness to serve on a perimeter patrol unit, or who participated in a patrol to seek out snipers that were picking off soldiers on or around the base....or who went on a recovery flight to pick up a downed pilot in the RVN or (in one occasion, in North Vietnam).

3) Strengthen the Legal Value of your own Statement.

Add a statement of your own that describes - in as much detail as possible, - the five "W's" and the one "H" of your perimeter duty:  who was with you, what you did, when you did it, where you did it, why you did it, and how frequently you did it.

One of our clients was an electrician - part of his job involved crawling out to the airstrip to repair lights on the landing strip that were damaged by sniper fire.  His Sworn Declaration, coupled with his MOS Position Description, was enough to secure presumptive Agent Orange exposure.

Don't forget this key fact - by itself it will not prove that you were exposed to Agent Orange on the perimeter of your Thai Air base.

However, every single Veteran that was assigned to a Thai base during the Vietnam War passed through the perimeter at least 2 times: on arrival and on departure.

Therefore, at least twice per tour, every Veteran was exposed to Agent Orange, so long as your arrival at, and departure from, the Royal Thai Air Base was during the time the VA is conceding Agent Orange was used at the base.

Most important, though - your statement is 100% worthless (legally speaking) if it appears on VA Form 21-4138....that's why the Veterans Law Blog encourages you to use the Sworn Declaration when documenting ALL lay evidence.

Find someone that served on the same base - either at the same time, or with the same MOS, or both.

There are enough Thai vets of the Vietnam War out there on Facebook that you shouldn't have too hard a time.

We are currently working on one claim, where we have located individuals that served in the same job at the same base - but from a different tour.

We believe this will establish the credibility of our client's statement as to his work on the perimeter - even though he never knew the other Veteran that served a couple tours after him.

5) Use Maps and images of the Thai base you served on to show your exposure to.

Technology gives us tools today that were not possible 10, or even 5, years ago.

Use Google Maps or Google Earth to locate your base on today's map.  Use the distance calculation tools to show the distance from the perimeter of the areas where you worked, ate, slept, etc.

Use color printers to print out these maps so that a DRO or BVA Hearing Official can see more clearly how close you were to Agent Orange when it was sprayed.

Where possible, locate an old map of the base and overlay it with the current map from Google Earth showing the distances, etc., from sprayed areas to the perimeter.

6) Reach out to other Thai Vets on Social Media.

There are a TON of sites for Veterans all over social media.   If you know of any, please email me at support@veteranslawblog.org and I'll come visit and, if you'd like, share it with other Veterans as well.

I will tell you that my law firm has had great results working with some social media groups to research information about Thai bases, MOS's of troops stationed at the Thai bases, and even maps and declarations from other Veterans.

Take advantage of these groups....here are my favorite 3 Facebook Groups for Veterans looking for help with VA Agent Orange Thailand exposure claims and appeals:

If you are one of those Vets that doesn't want VA Benefits, or who doesn't feel like you are entitled to them, please do your surviving spouse a favor and document everything you can remember doing while you served in Thailand during the Vietnam War.

My law firm has represented a good number of spouses of Vietnam era Veterans that were exposed to Agent Orange in Thailand - and it is REALLY hard to prove their claims without a statement from the Veteran. No impossible, but much harder than it has to be.

These survivor benefits can make a HUGE difference in the life of a Veteran's surviving spouse who often depended on the Veteran for financial support: once that Veteran passes away, that financial support is gone.

How do you Submit Agent Orange Thailand Exposure Evidence to the VA?

Which are you more likely to hang your hat on, if you are the person responsible for deciding a case:

A note written in barely legible handwriting, undated, unsigned saying you worked on the perimeter at NKP Airbase in Thailand?

A typed, signed and Sworn Declaration describing the 5 W's and 1 H of your perimeter duties in Thailand.

And, you want your evidence to stand out - that is why I say that any time you submit statements from yourself or other Veterans - consider ditching the VA Form 21-4138 and think about using a Sworn Declaration Form instead.

Verify that your evidence is 5-Star Evidence:  evidence that is material, probative, relevant, competent and credible.

My experience tells me that the closer you get to 5-Star Lay Evidence, the higher the degree of success you will have in your VA Claim for a condition resulting from presumptive Agent Orange exposure.

Do you know another way to prove Agent Orange Thailand exposure?  If so, thousands of Veterans would love to hear your method - reach out and tell me about it!

** The image at the top of this post shows leaking barrels of Agent Orange on the Johnson Atoll, circa 1973.