VA Claims Credibility – it’s not just about lying or telling the truth. 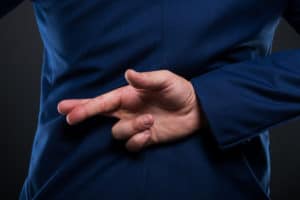 If Lawyers could charge by the word, we could charge a lot for the word credibility. Take this statement – a very common example of an adverse VA claims credibility finding:

“The Board concludes that the Veteran’s statements are not credible.”

“The BVA does not think the veteran is not credible, he’s just not an accurate historian.”

Have you seen these types of phrases in your BVA Decision? Or in a Ratings Decision from the VA Regional Office?  If so, I’m willing to bet it made you mad: “How dare they call me a liar” might have been your angry response.

If a certain fact or statement “passes muster” or “makes sense” it is said in the law to be credible.

This is dangerous, in a legal setting, because we all know that one man’s common sense is another man’s treason.

So over the years, the powers that be have figured out ways to make VA claims credibility far more complicated than it has to be.

In this post, I’m going to show you some simpler ways to argue that your evidence in a VA Claim is credible (or the VA’s evidence is not credible).

But first, let me set the stage and explain what I’m talking about.

VA Claims Credibility is 1 of the 5 Stars of VA Claims Evidence.

When we talk about the 8 steps to improving a VA Claim, we recognize that the 5th step is to build your VA claim with “5 Star Evidence”.

In short, your evidence  must be competent, credible, probative, material and relevant.

SCRREEEEECH.  (That’s the sound of a needle scratching against a record, by the way).

What on earth is that mouthful of legalese!?

This is one thing that frustrates me about the VA Claims Process – the BVA decision often starts from the result the BVA judge wants to achieve and reasons backwards.  When this happens, the result is a BVA denial of the claim, written in a way that fails to adequately explain the reasoning behind decision to the veteran.

That’s where the Veterans Law Blog® comes in.

A goal of the Veterans Law Blog® is to take the legalese out of the process and help veterans understand what the lay really says. In plain English. Normal human speak.

A more informed Veteran means a more efficient claims process – for the veteran!

We tackle each of the 5-Stars of evidence in separate posts.

In this post, I want to give you a high-level overview of what it means for evidence to be credible.

When someone tells you something – anything – you evaluate whether they know what they are talking about by – consciously or sub-consciously, considering these 3 things.

If someone saw, witnessed, or experienced something, they are far more credible than someone who didn’t see or witness something.

You go in to get surgery on your appendix, but are under anesthesia.  During that surgery, the doctor used a dirty rag to clean the incision and you got an infection.

At the trial, if you testify that the doctor used a dirty rag, your testimony will not be credible – you were under anesthesia and could not see the incident.

When a person with an interest in the outcome of a dispute offers testimony about a key issue in the dispute, their testimony is slightly  less credible than something said by someone who does not have the proverbial “dog in the fight.”

It’s hard to find bias in a VA Claim – the closest you can come is arguing that a particular doctor had a vested interest in the outcome of the C&P exam (other than the fact that his bread is buttered by the bureaucracy that denied your claim, ironically).

I’m not talking about the kind of integrity we all know from our days in service. This isn’t the integrity of “truth-telling,” honesty, or good character — although sometimes it could mean that.

In the context of VA claims credibility, integrity looks to the connection among the facts and evidence.

You know that feeling where something about a buddy’s story “doesn’t add up”?  It’s usually because there is a fact in the chain missing: because a fact in the story feels like it is missing, the story doesn’t have integrity.

Architects talk about structural integrity – the ability of a building to hold itself together.  When the hull of a ship is breached, it has lost its integrity – its ability to stay together.

Here’s an example.  Your are trying to get a presumption of exposure to Agent Orange based on having boots-on-the ground in Vietnam as you passed through on your way to an assignment at a military base in Thailand.  You  tell an elaborate story of how you passed through the Republic of Vietnam, including how you have Vietnamese currency from a purchase you made there. You even saved that Vietnamese currency in an envelope of “stuff” from your military days.  When you show this currency to the BVA, however, the date on the bill is after the date you said you were there.

Because of that one fact, your story doesn’t have integrity. You could not have picked up that bill at the time you said because the bill didn’t exist until after that time.

But that lack of integrity does not mean you are lying.

Your story could have happened exactly as you said. It could be that you don’t remember the exact time you were in Vietnam. Maybe you stopped on your way HOME from Thailand, not on your way there.

This lack of factual integrity or evidentiary integrity has nothing to do with lying or truth-telling.  Its just that all the facts don’t add up the way you told it.

The best way to deal with an adverse VA claims credibility finding by the VA or the BVA is to avoid it altogether. While not the only questions you might ask to verify the credibility of your VA Claims evidence or testimony, these 3 questions are a natural place to start. They focus on the 3 key elements of VA Claims credibility discussed above: Perception, Bias and Integrity.

1) Did the person asserting the fact (whether it is you or a doctor who wrote a note in a military medical record 30 years earlier) have the ability to witness the thing he/she is asserting?  (Make sure that your evidence is offered by someone with the correct degree of Perception)

2) Did the person asserting the fact have an interest in the outcome (other than you, the Veteran – technically, the VA can’t consider that fact), or an interest in telling an untruth? (Does the witness offering the evidence or testimony have a Bias)

3) Does the testimony or evidence have “structural integrity” with the rest of the facts? (Does your VA claims evidence have Integrity). As an aside, this is another reason that getting your VA C-file is the most important thing you do in a VA claim – if you don’t know what the VA has in your C-File, you cannot possibly verify the consistency between and among every piece of evidence in your claim.

2 Tips that Will Add a “Credibility Boost” to your Lay Evidence:

Tip #1:  Change the Form that you use to Submit your Lay Evidence.

Most Veterans use VA Form 21-4138 (Statement in Support of Claim) to submit their Lay Evidence.  And most Veterans overuse this form – to the point that Raters, DROs and Judges are all numb to it.

The VA Form 21-4138 is just a blank piece of paper – in reality, it has as much legal value in your VA Claim as a postcard from your Mom’s last visit to San Francisco. In other words, none.

A BVA judge is going to give evidence that is sworn “under penalty of perjury” more weight than evidence that is just “true and correct to the best of my knowledge” (the language in the VA Form 21-4138).

That’s why I recommend that Veterans  use this Sworn Declaration instead of the VA Form 21-4138.

If more than one lay witness – or more than one piece of lay evidence – reinforces the same fact, than it is said in the law to be a corroborated fact.

Corroborated facts are more reliable because they remove the 3 problems above (Perception problems, bias problems, and factual integrity) from the equation.

But it’s not enough to just have more than one witness say the same thing.  Corroboration is so much more than that.

To properly corroborate Lay Evidence demonstrating the facts of the Impairment Rating Pillar, for example, you have to fortify the Veteran’s statement with additional evidence of the Frequency, Chronology, and Severity of the Symptoms and Limitations that the Veteran experiences.

I show Veterans how to do this when developing their own claims and appeals in this Training Program and Guidebooks: How to File a VA Claim

Seriously – lawyers are trained to deal with this stuff. It’s why we incur tens of thousands of dollars in debt and 3 years of living hell in law school.

Beyond the concepts above, there are ways to impeach credibility and ways to rehabilitate witnesses or evidence that has been impeached on credibility grounds. Intrinsic or extrinsic methods of impeachment or rehabilitation can dramatically affect the weight of evidence has.

And VA Claims credibility  can be overwhelmingly complex and obtuse. You can get a sense of some of the unique problems of credibility in VA claims in Professor Nagin’s article on the topic in the Harvard Law Review.

And, most important in a VA claim, if the VA or BVA uses the word credibility as a basis for denying your appeal, get an attorney to help you at the CAVC.

You only get one shot at reversing or vacating an adverse VA claims credibility finding at the Veterans Court – and if you miss, there’s no going back,

My law firm, for example, focuses on challenging adverse credibility determinations in appeals to the Court of Appeals for Veterans Claims, and understands how to use standards of review to get the findings vacated by the Court.