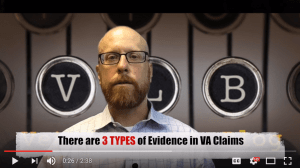 VA Claims Evidence.  It’s how you PROVE a VA claim or appeal.

KNOWING the law of VA Claims or Appeals is really important. In fact, its one of my 8 steps to improving your VA Claim or Appeal

Including 5-Star Evidence in your VA Claim is vital to winning your VA claim.

HOW you argue your case to the VA is also very important; like the old saying goes, HOW you say something is usually more important than WHAT you say.

But if you don’t have the right VA Claims Evidence in your C-File, or in your arguments to the VA, you will be denied.

Any legal system – and particularly the VA Claims process – requires evidence to prove your claim or argument. And while the Veteran does not have to produce as much evidence in a VA claim as a plaintiff in civil court (our burden of proof is only “as least as likely as not”), you still need some proof for what you are claiming.

The problem is that most Veterans don’t know WHAT VA Claims Evidence to include with their claim or appeal.

They typically send off a haystack of documents to the VA and tell the rater to figure out what all the VA Claims Evidence means.

So let’s start with talking about the 3 types of VA Claims Evidence you are going to want to consider for inclusion in your claim or appeal.

Click on the image below to watch the video:

If you are on a tablet or mobile device and prefer to watch the video on YouTube, be sure to check out the DOZENS of videos on the Veterans Law Blog You Tube Channel.