Nehmer should apply equally to ALL Vets exposed to Agent Orange. 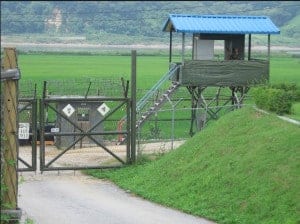 Nehmer – Agent Orange – Korean DMZ:  a  Perfect Storm of Error in the VA, if you ask me.

If you are a veteran of the Vietnam era, and have filed a claim for service connection of a condition presumed to be caused by Agent Orange, there is no doubt that you  have heard of “Nehmer”.

What are the Nehmer Rules?

The “Nehmer Rules” are a set of rules that require the VA to consider much earlier effective dates for Veterans whose claim includes a condition presumed caused by Agent Orange.

Over the past few years, I’ve noticed that the VA isn’t treating everyone fairly under the Nehmer Rules.

Exposed to Agent Orange on the Korean DMZ?  VA says No Nehmer Rules for you.

Doused with Agent Orange on a base or outpost in Thailand?  VA says No Nehmer for you, either.

Exposed to Agent Orange in Okinawa?  You’re screwed – the VA won’t even concede exposure to Agent Orange there, even though we know it was shipped through and stored there throughout the Vietnam War.

During the Vietnam era it was used in Thailand, Korea and many CONUS bases – and those are just the places the government admits.

It is suspected (cough, cough…known) to have been used in Laos, Cambodia, Australia, the Phillipines and god knows where else.

(Don’t even get me started on the fiction that Navy Vets weren’t exposed to this putrid chemical unless they went into the inland waterways of Vietnam….it’s time for someone to call “bullshit” on that…..but I’ll save that rant for another day.)

Apr 2015 UPDATE: My good friend and Veterans Advocate Matt Hill recently argued a case at the Court of Appeals for Veterans Claims….

…he is trying to get the VA to pay AO compensation for Brown Water Navy Vets that served in inland waterways that the VA has erroneously labeled  “Open Water Ports”.

Read the case by looking up Gray v. McDonald, CAVC Cause No 13-3339 – or go to the court’s page and listen to the audio of the Oral Arguments by clicking here.  Listen to the VA attorney squirm – it’s entertaining.

It’s these Vets – the ones who served in Thailand or Korea during the Vietnam War – who are getting a raw deal from the VA.

How the VA Screws a Lot of Vets out of Nehmer Effective Date Rules.

The VA is telling them that the earlier effective date rules of Nehmer don’t apply – for no other reason than you weren’t exposed to the poison on the ground in Vietnam.

I have studied the original lawsuit, the original class certification, the original settlements and the follow-on Nehmer cases.  I can’t find a single basis for the VA denying earlier effective dates for Vietnam-era Veterans exposed to Agent Orange in Korea or in Thailand.

In fact, I have found just the opposite.

I believe that the Nehmer Rules apply to ALL Veterans that were exposed to Agent Orange – from the Mekong Delta to the Korean DMZ, from Ft. Ritchie, Maryland, to Camp Casey, Korea.

What is the Attig Law Firm doing to fix this Nehmer Rule Problem?

The Attig Law Firm is taking this fight to the VA and get them to stop screwing Vietnam era Vets in yet another area of the claims process.

If you are a Vietnam-era Veteran who meets ALL of the following criteria, I am asking you to contact an accredited VA Attorney with experience in this matters:

1. You were exposed to Agent Orange while serving  in certain units in Korea during the Vietnam War

2. You have one (or more) medical conditions on the VA’s list of conditions presumed caused by Agent Orange.

3. The VA did not apply the Nehmer Effective Date rules in your case.

This IS NOT an offer to represent you if you meet all of those criteria.

What I am saying is that I’d very much like to talk to you about your  VA Appeal, if you meet all of these criteria, to see if your case would be a good fact pattern to push for broader Nehmer coverage for ALL Vietnam-era Veterans exposed to Agent Orange, wherever it occurred.