Want to Handle Your Own VA Claims? Here are 10 Rule Books to have handy. 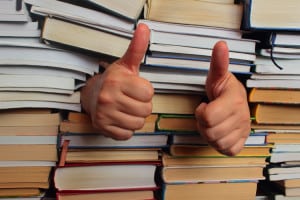 One of the most important parts of improving your own VA Disability claim is learning the law.

Now, as many of you who have followed this blog a lot over the years know, the law can get kinda thick.

In fact, its downright impenetrable sometimes.

Even as a lawyer – trained to understand the hierarchy of law, code, policy, caselaw, etc – I find VA Benefits law to be extremely obtuse and inaccessible.

It’s one of the reasons this process is so damn backed up – the harder you make the rules, the slower the game.

Take the game of bowling, for example.  3 Rules, near as I can tell:

That’s about it as far as bowling goes, right?

Point is, it’s a simple game and it moves quick, doesn’t it?  A good round is over in 30 minutes.

On the other end of the spectrum, there’s baseball.

They have rules about how to make the rules that interpret the rules.

Here’s one of my favorite rules in baseball – the dropped third strike.  A relatively simple concept – what happens if the catcher drops the 3rd strike?  Here’s what the Baseball Rules say:

That’s a mouthful of marbles, isn’t it?  (There’s a lot more to that rule, by the way).

And a baseball game can last 3.5 hours!  Though I love the game, I’ve heard others say that baseball is as slow as watching paint dry.

In one case, for example, we have been fighting (all the way to the Veterans Court) for a survivor because the VA insists that (among other arguments) a Veteran must sign the Survivor’s benefits claim.  (Take a minute….think that through).

But here’s the difference between baseball and VA claims …  Baseball only has ONE rulebook.

The VA has at least 10 Rulebooks for VA Claims.

7) BVA (Board of Veterans Appeals) Decisions

10) Federal Circuit/SCOTUS decisions (SCOTUS = Supreme Court of the United States…I count those last 2 as 1, since they are so rare)

For the lawyer, 10 Rule Books is challenging – particularly when the VA doesn’t give you access to a few of them

For the layman – the individual Veteran or the small-county VSO (Veterans Service Office) trying to slug through the morass of VA Claims –  it can be damn near impossible to understand what all these things are.

So, here’s a Quick Reference Guide to what each of these types of “rule books” are, and which ones trump which ones.

Title 38 of the US Code is laws that have passed both Houses of Congress, and have been signed into law by the President, that impact the VA, VHA (Veterans Health Administration) or VBA (Veterans Benefits Administration).

Generally speaking, the US Code – 38 USC in particular –  trumps all other “rule books” listed above – with the exception that Precedential Court Decisions (Numbers 9 and 10, above) might interpret (or clarify) what the laws mean in application to various facts, or they might find a law Unconstitutional.

If a Court finds a law to be unconstitutional, than the part that is unconstitutional is no longer the law of the land.  It may not ever be removed from 38 USC- or at least not for a couple iterations of publication, or until Congress takes another stab at writing a Constitutional law – so it’s important to look at how the Courts are interpreting a particular US Code or US Code section.

An annotated code book is like a “cheat sheet” – it contains references to all the regulations and cases that apply to the particular section of the code.

The USCA is a handy tool if you don’t know how to do legal research, or if you do know legal research but  just need a quick primer to how the law is interpreted, or what the “big” cases are in relation to that section of the US Code.

In our system of government, the general idea is that the legislature writes the law, the Courts interpret the law, and the Executive Branch enforces the law.

This is the famous “checks-and-balances” system that exists in our Constitution.

To keep Congress and the States in line – and to keep them from passing laws that limit the rights of all US Citizens – the Courts have the power to strike down congressional law.

To keep the Executive branch “in line”, Congress controls the purse-strings – the VA can’t spend a dime that Congress hasn’t authorized (at least in theory, right?).

And to keep the Courts from going too far “off the reservation”, Courts have no ability to enforce law.

Only the Executive Branch has the authority to actual ENFORCE a law, or ensure it is followed.

Why is all that important?

Well, to enforce  – or to follow – a particular law written by Congress, the Executive Branch needs to write implementing regulations.

That’s what 38 CFR is: it is the VA’s rules interpreting the law written by Congress.

If a CFR regulation is not consistent with a US Code section, 38 USC prevails – but not until a Court says it does.

These are three very different “documents”, but they all have one thing in common – they lay out the VA policy and interpretation of its own regulations.

I’ve talked extensively about the M21-1MR, and won’t repeat myself here …. other than to say that this is the VA Rater’s “Bible”…their playbook.

It’s  available for free online at the VA website, or you can pay a guy like this a couple hundred bucks a year to send you regular PDF updates of the whole manual.

FAST Letters are intriguing, too.

The VA does a lot of good – and a lot of dirty – things through FAST letters.

A FAST letter is, essentially, a letter from “810 Vermont Ave” telling the rest of the VBA or the C&P Service how to handle particular issues.

FAST Letters can be as harmless as New Burial Plot Allowance rates, or they might introduce entirely new ways of thinking and handling a TDIU claim.

Where do you get them?

Damned if I know where all of the FAST letters are collected.

They used to all be on the VA’s website, until someone figured out that lawyers were downloading and reading them, and so the VA hid them in a salt mine in Utah.

In all seriousness, to find these things, you either have to ask the VA for a copy, or see if you can find one out there on “the google”.

I’d love for y’all to post any links  (in the comments section below) where you know there are FAST letters, and I’ll start collecting a list – see if we can find a complete collection for Veterans to use.

The last common type of interpretative writing from the VA is the C&P Bulletin.

Think of these like the VBA’s newsletter for Raters.

But instead of talking about how Betty Sue in Human Resources is retiring, or how much was raised at the Director’s wife’s Tarot-Card reading party (that really happened, by the way)  these C&P bulletins actually attempt to get Raters down in the ROs to act consistently.

Try being the key word.

The C&P Bulletins are published monthly, and again, it’s hard to find a place where they are all collected.

If you know where to find a complete list with links for all C&P Bulletins, post it in the comments section, below.

BVA Decisions have little or no precedential value.

This is  because they are often heavily redacted, or personally identifiable information is culled out or anonymized.  Further, BVA decisions are often so filled with errors, they are often unreliable tools for most Veterans.

But that said, BVA Decisions are invaluable to the savvy Veteran.

Here’s what BVA Decisions can tell you:

a) Look at all the decisions by a particular BVA Hearing Official before your hearing to get a sense of how your BVA Hearing might go.

How do you find out who your BVA Hearing Official is? Call the BVA a couple days before the hearing and ask.

I’m here to tell you, this is one of the most powerful things that a Veteran can do before going to a BVA Hearing.

Read decisions written by your Hearing Official, and read decisions involving your same legal issues.   It will give you a lot of Wisdom that other Veterans don’t have – and it is about the only time I can think of that Wisdom is Totally Free.

Where do you find these decisions? There is  a searchable database online: click here to see and search it.

c) Look through the decisions to see if your attorney is listed – see what kinds of cases he or she handles, but I wouldn’t rely too heavily on their “win” rate at the BVA.  The BVA’s error rate is abysmal – Abe Lincoln would probably lose all of his cases before the BVA – even if he argued the law correctly.

Be careful about judging an attorney by the absence of their name in the decisions, though – my firm, for example, focuses on  winning cases at the RO level – it just seems so pointless to sit in line at the BVA for 5 years, only to have some half-assed decision that is wrong on the facts or applies the wrong law deny your appeal and force you to have to go to the Veterans Court.

Learn more ways to research your attorney by clicking here.

And, like BVA decisions, these single judge decisions have no “precedential value”.

Although, the Court might be on its way to trying to be more like the Federal Courts…they’ve issued a new proposed rule on referring to non-precedential decisions in filings at the CAVC.

In my opinion, the proliferation of single judge decisions is one of the major reasons that the VA Claims process is backlogged – because the VA gets no clear guidance as to where the interpretive lines are, and so they make the same mistakes over and over and over and over again.

If the Veterans Court increased the precedential decisions it issues, the rules down below would be much more clear, and the  ripple effect into the claims and appeals process.

The Rule of Law needs precedent to operate after the Courts have ruled….or else it becomes the “Rule-of-Whenever-the-Hell-We-Do-Whatever-We-Want-To-Do”.

I’m telling you, you can’t lay ALL the blame for the backlog at the VBAs feet…Congress owns some…the Courts own some….Veterans own some….you get the idea.

If you do find a precedential decision, it is pretty powerful in terms of interpretation of the law.

Unless it’s been reversed by the Federal Circuit or Supreme Court, then a Veterans Court precedential decision can often be a nail in the coffin for the VA’s denial of your claim or appeal.

I’m not going to go into those courts too much.

They don’t issue a whole lot of decisions affecting Veterans claims and appeals…just know that Fed Circuit and Supreme Court decisions pretty much trump any other court’s decision, and depending on how they are written, might invalidate a US Code or CFR provision.

All those rules…it’s easy to see why this claims process is a mess. A lot of people get paid a lot of money to keep this system functioning.

The VA Office of General Counsel, for example, wants $92.5 MILLION dollars to operate in FY 2016.  Who wouldn’t want to keep milking that cash cow?

So you want to fix the backlog?  Let’s simplify this process.

Let’s cut the NOD-SOC-VA9 appeal process to something simpler and more manageable.

Let’s get the OGC to stop making ridiculous arguments to justify their budget.

Let’s get the VBA to stop treating Veterans like children and let them make more of their own decisions.

Until that happens, though….

….we’re just going to have to keep all 10 Rule Books handy.