Chronic Conditions, the Presumption of Nexus, and Active Duty for Training: the “Darby Queen” of VA Claims and Appeals. 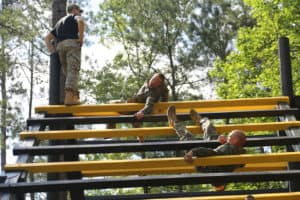 The Presumption of Nexus for Chronic Conditions is the “Darby Queen” of VA Claims.

A lot of the time, Veterans filing VA claims want to jump right in and get to the “nexus” part of their claim – and in this post we will talk about a particular presumption of nexus that applies to veterans.

But to get to the beginning, we have to rewind a bit…..

The first and most important pillar of any claim for service connection is what I call “Pillar 1: Eligibility“.

{Note, the concept of the 4 Pillars of a VA Service connection claim is Veterans Law Blog jargon, not the actual law.  I came up with this approach several years ago as part of my 8 Steps to Improving your VA Disability Claim  – breaking the basic service connection claim into 4 Pillars has helped many Veterans understand what they have to prove to win their claims – and why it is important to prove it}

And the first and most important component of Pillar 1 is that a Veteran must be able to show that they had active federal service which rendered them eligible for benefits.

The term “active federal service” seems pretty clear – but it gets really murky when the Veteran is a Reservist activated for a period of active duty for training – known by the acronym “ADCUTRA”.

The reason for the confusion arises both  in the context of proving eligibility for benefits – if the Veteran only has ADCUTRA service, or more specifically argues that his or her injury or disability had its origin in an ADCUTRA period, the VA and the BVA will likely use that period of service as a basis to find either that the Veteran is not eligible for service connection benefits (a Pillar 1 denial) or that the Veteran’s injury is not related to military service because it occurred in an ADCUTRA period (a Pillar 2 Denial).

You ain’t seen NOTHING yet…..I don’t honestly understand how we can claim that this VA claims process is a “beneficial non-adversarial process” when a Veteran has to engage in a veritable Darby Queen of legal jargon and mumbo jumbo acronyms just to prove that their current disability had its origins in military service.

If a veteran’s medical condition is a condition that is on the list of so-called “chronic” medical conditions – look at 38 CFR 3.309(a) for the list – then under  Pillar 2 of a VA Claim, the Veteran’s condition is presumed to be related to military service if they present to a compensable level within 1 year of completion of active federal service.

What if, however, the chronic condition presents to a compensable level within 1 year of a period of ADCUTRA – active duty for training in the Reserves for example?

Let’s make it all make sense with a basic fact scenario:

You served in the military.  After your active duty time, you went into the reserves. During a period of ADCUTRA service (active duty for training) you were diagnosed and treated for hypertension – a condition listed as chronic in 38 CFR § 3.309(a).

The VA service connected you for the hypertension based on the diagnosis that occurred while you were active duty for training (ADCUTRA).

Write down your answer….we’ll check later to see if you got it right, because….

….The BVA Commonly gets the Answer Wrong.

Here is what the BVA often says: “Service Connection is denied because presumptive periods for chronic diseases do not apply to periods of ACDUTRA”.

The BVA is wrong.  Here’s the actual law:

Why do we know that the Biggins holding is correct?

Because CONGRESS – whose laws trump the VA’s regulations, rules and policies – has said that the presumption of service connection for any chronic disease is available for any veteran who has served more than 90 days in “the active military … service”, so long as the chronic disease manifests to a 10% level within 1 year of separation from active military service .  38 USC § 1112(a)(1); 38 USC 1137.

This presumption applies even if there is NO evidence of the disease during the period of service. See 38 CFR 3.307(a).

Confused? You are Not Alone.

Any veteran that has to navigate this legal gauntlet to prove their disability is at least as likely as not related to a period of ACDUTRA (active duty for training) service cannot be said to be participating in a non-adversarial beneficial legal process.

Sure, they are participating in a legal process – where the VA receives the benefit, what with its army of attorneys and raters who spend their lives looking to make proof of claims harder and harder.

And to the extent that the VA doesn’t have to defend its position until the record is closed, and no facts can be re-assessed (i.e, almost every appeal to the Veterans Court), only the VA gets the benefit of not having an adversary.

If you meet the following factors, get a lawyer to help your case.

Not because we are better than VSOs or agents, but because we spend hundreds-of-thousands of dollars to go to school to learn how to fight this kind of obtuse legal mumbo-jumbo, and in fact many of us relish diving into this swamp and wrestling these alligators.

If you are denied by the BVA based on a lack of presumptive nexus between your condition and an ADCUTRA period of service, send my law firm your BVA Decision and we’ll see if we can help.

(Frankly, send your decision to any law firm that works before the CAVC – I’m not pitching my firm, I just want to see Veterans at the CAVC hire an attorney that has experience there, as there are often mistakes that would go unnoticed by most pro-se Vets at the CAVC).

Now, go have a drink – if you drink –  you earned it for making it through this post.

If you don’t drink, well, celebrate with a 5 mile run.