“Hey fatso, how’d you get the diabetes?” 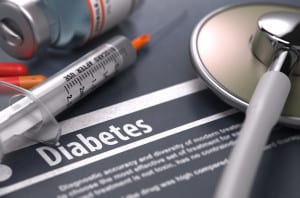 Seriously – someone asked me that question!

Not because I’m fat or have a diagnosis of diabetes, but because of this post on how the VA severed this Veteran’s VA diabetes compensation.

When I explained to this particular individual that Diabetes was not a disease of fat people, he responded: “Stop Lying”.

(Ummm, okay….first, differing opinions are not lies.  Making up facts with an intent to deceive is a lie.  If someone else has an opinion you don’t like, it’s not a lie. Its just a different opinion.)

As it turns out, though, there are a lot of people out there that don’t understand what Diabetes is,  how diabetes could  be related to military service or how the VA diabetes compensation claims process works.

The Veterans Law Blog is all about education – so let’s tear down a couple of myths about Diabetes.

Diabetes is the name given to the disease that prevents your body from properly producing insulin.

Insulin – produced in your pancreas – helps your body absorb the glucose into your blood stream, where it can be sent to various cells in your body for energy.

If your body doesn’t produce enough insulin, or is unable to use insulin properly,  glucose will build up in your blood and cause Diabetes.

Myth #2: Diabetes is caused by obesity.

There are so many different causes of diabetes.

Pregnancy can cause diabetes.

Exposure to dioxin – or any chemical or poison or radioactive molecules that alter our body’s gene structure and DNA – can cause diabetes.

Eating the crap that Monsanto (who manufactured Agent Orange, by the way) puts into our food supply in the form of genetically modified food and various other non-food products.

The American diet – loaded with sugar and High Fructose Corn Syrup (translate: High Sugar Corn Sugars) – has a significant propensity to cause insulin and blood sugar problems. This is why we have a diabetes and obesity epidemic in the US:  our “traditional” American diet. Which happens to make people obese, at the same time.

Myth #3: To get VA Diabetes Compensation, you have to show CAUSATION.

First, many Veterans – and far too often, the BVA – WRONGLY believe that military service has to CAUSE a condition for it to be service-connected.

This is largely untrue.

If your current disease, disability, medical condition or illness was diagnosed in service, or was a pre-existing condition that was aggravated by military service, or was caused by another condition, it can be service-connected.  There are 5 Paths to Service Connection.

Only ONE of those FIVE paths requires proof of actual causation.

Myth #4: Military service has to CAUSE diabetes for a Veteran to win a VA service-connection claim.

There are many, many reasons that Veterans tend to be able to show an entitlement to VA Diabetes Compensation.  As I said above, only  ONE path to service connection has to do with actual causation.

If you eat the crappy food that the military serves – especially those MREs that are OVER-LOADED with carbohydrates and sugars to keep you “energized on the cheap” – you are more likely than the civilian population to be diagnosed with Diabetes later in life. Whether you are obese or not.

If you were exposed to Agent Orange, the law PRESUMES that your diabetes resulted from that exposure.

If you became pregnant while serving in the military and had “Gestational Diabetes”, which developed into full-blown Diabetes after your pregnancy, you may be able to prove your diabetes is service-connected.

If you are diagnosed with Type I Diabetes in service, you will most likely be able to get diabetes service connected.

Okay, this isn’t a myth. Mean people really do suck.

Calling a fellow Veteran a “fatso” because he or she has service-connected diabetes is pretty mean.  Heck, calling anyone names because of a medical condition is pretty damn mean.

Let me give you an example how Veterans that are mean or rude – to other Veterans or the VA – get left in the rain.  My law firm doesn’t work with mean or rude people.

They are  a drain on our energy and resources, nothing can make them happy, and they pollute the rest of the world with vile words and actions.

We don’t ask that our clients “poop rainbows” or be “servile” to VA employees, though – life is hard and has some steep ups and downs.

We don’t expect folks to always be cheerful.

But if you are mean to my Team, or show an inability to be tolerant of different opinions or lifestyles, we probably won’t offer a consultation or representation in your claim.

Interestingly, that’s how many folks at the VA feel, too.

Yes,there are some parasitic vampires that work for the VA, and there are some world-class bureaucrats with their hand in the Federal Cash Register.

And I am a firm believer in maintaining a philosophy of Defiant Optimism when it comes to dealing with this obtuse bureaucracy that is our National Embarrassment.

But I make a distinction between the Bureaucracy and the People.  It is my experience that most folks in the VA are trying really hard to help Veterans – they, too, are stymied by the bureaucracy.

When you find someone that is honestly trying to help you at the VA – whether its “perfect” help or just the best that they can do given their position and the limits of the VA workplace – say Thank You.  Be polite. Be civil.

When you run into one of the bureaucrats that is actively adding red-tape – stand your ground and don’t back down. We can all do that without being rude, uncivil, or an ass.

Tell me what you think – do Veterans need to be rude and uncivil when dealing with each other and the VA?