Do you know about this under-utilized path to Service Connection? 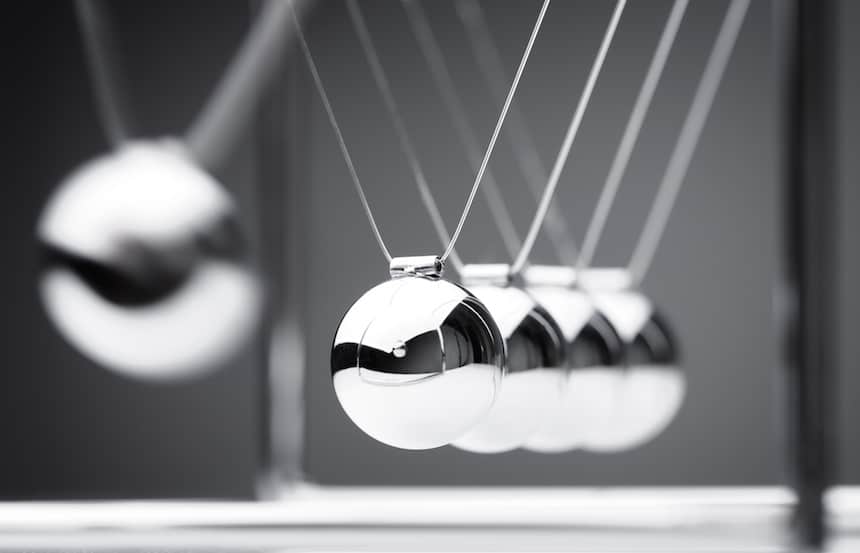 Well, actually, it may not be the easiest….but it’s not the hardest, and it is most certainly  the most straightforward to prove.

Even if you think you know a lot about VA claims and appeals, you will come out of this training a LOT smarter, and a LOT more savvy than most other Veterans out there.

So let’s learn about “secondary service connection”….what is it, and how does it work?

How does secondary service connection work?

Remember the toy/game in the image above?  It’s called Newton’s Cradle…and it works a little like this: when the ball on one hand strikes those that are hanging, it knocks the balls on the other side.  It is a great demonstration of how an impact in one place can have a result in another place.

In its simplest terms, secondary service connection is service-connecting a disabling disease, illness or injury which may or may not have actually happened in service to another condition that is already service-connected.

This type of service connection is often overlooked by Veterans.

Far too many Veterans think, “This new medical condition I was just diagnosed was not directly  caused by or in military service, so I can’t service connect it.”

This is not true.

The logic behind secondary service connection is this: medical conditions, disease, and disabilities don’t stop messing with your body once one is diagnosed.  A problem with one part of the body can cause big problems elsewhere in the body.

A broken jaw from that air assault mission gone wrong that didn’t heal properly can cause obstructive sleep apnea.

A back condition from years of working in tight spaces on a submarine or a Navy destroyer can cause – or be caused by – knee problems.

Central Sleep apnea from the traumatic brain injury can cause migraines.

You get the idea, I’m sure.

Why is “Secondary Service Connection” a valid legal theory?

Because the parts of the human body are not distinct and separate.

Our body is designed so that all the organs, all the muscles, all the bones, and your pulmonary and cardiovascular systems have to work in conjunction with each other.

Monkey with one part of the human body, and it will have an effect on other parts.

Have you heard stories about vascular (blood flow) problems playing a role in Alzheimer’s disease?

In one case where I am working with the Surviving Spouse of a Vietnam Veteran, we are arguing exactly that: that the (now deceased) Veteran’s vascular disease caused his vascular dementia (misdiagnosed as Alzheimer’s) and ultimately contributed to the Veteran’s death.

Or how about this one that I learned about while writing the Sleep Apnea Field Manual: in some cases, Sleep Apnea can CAUSE diabetes in non-obese people.  It turns out that the sleep function of the body also plays a role in regulating blood glucose levels.   And, what’s worse, sleep apnea can prevent the body’s ability to process insulin, making treatment of diabetes much more challenging.

What you need to prove Secondary Service-Connection?

This is not the case.

Generally, the legal standard is that you will need to produce sufficient competent and credible medical evidence to show that it is at least as likely as not that the second condition was caused or resulted from the first condition.

While you can use lay evidence in various elements of your VA claim, I don’t know of any person who can explain medical causation other than medical experts.

So, to establish secondary service connection to the satisfaction of the VA, you will most certainly need at least one medical expert opinion.

As anyone who has dealt with doctors knows, opinions can vary from doctor to doctor.

That is why it is a good tactic to not really on the expert opinion of the VA C&P Examiner. It is highly recommended that you consult with a private medical expert to establish the required proof.

Keep in mind, that if there is an even balance of evidence supporting and opposing secondary service-connection (lawyers say that the evidence is in “equipose”), the VA is supposed to give the Veteran the benefit of the doubt.

Where Can I learn more about Secondary Service Connection?

There are several lessons  dedicated to teaching you how to prove service connection – direct, secondary/aggravation, presumptive, and more – in your VA claim: click here to check out this 5+ hour training course.