If there are 2 medical issues that nearly every single Veteran has to deal with, it is tinnitus and knee problems: which is why questions about VA disability compensation for a knee replacement are among the most frequent questions I get in my email inbox.

If you were Army or Marine, a good bit of your time was spent running in formation with improper footwear, carrying 80+ pounds of socks and MREs from Point A to Point B.

If you were in the Air Force, you may have spent a good bit of time crouched under – or in – planes.

And you Navy guys and gals ran up and down steps in tight quarters.

Even the desk jockeys have knee problems – sitting is the absolute worst position for your hips, knees and feet.   Human musculature is not designed for sitting all day.

The point is that one of the most common types of VA Claims is a claim for something to do with the knees.

And, as a Veteran’s knee condition worsens, he or she may find themselves needing a partial or total knee replacement.

Can a Veteran get  disability compensation for a Knee Replacement?

What is the Difference Between a Total and Partial Knee Replacement?

First of all, the knee is one of the most fascinating and most complex joints in the human body.

Let’s start with the “complex” part of that statement.

This is part of what makes the knee so fascinating – it is less a physical thing than a  massive mixing bowl of muscles, tendons, ligaments, bones, and cartilage.

In fact, when I was going through physical therapy for a recent problem with my knee from running, it was explained to me that the knee basically “floats” between the hip and the foot, and converts instability in one to stability in the other.

Without the knee, this is how we would walk:

The take away from all this is that a LOT can go wrong in a knee…and when a LOT goes wrong for a LONG time, your doctor may start talking to you about knee replacements.

When that happens, you will learn that doctors talk a lot about knees in “compartments”. 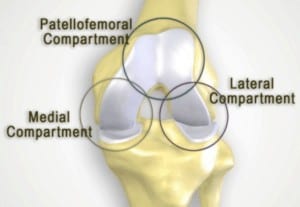 When you get a Total Knee Replacement, some or all of each of these compartments is cleaned out and replaced with a prothesis. (This is why, sometimes, even a TOTAL knee replacement is not replacing everything in the knee).

When you get a Partial Knee Replacement, you are getting a prosthesis in one or more (but not all) of the 3 knee compartments.

Let me qualify all of the above when it comes to the medical description of the knee: doctors and medically trained will read the above description and find a lot to argue with in it.  I do not intend to make this post the end-all, be-all description of how the knee works.   I am not a doctor, I have no medical education, and everything I learn is from talking to medical experts and self-study: I try to simplify complex topics to make things more understandable to my brother and sister Veterans and, in doing so, over-simplify too much.  If you are a medical expert in this area, and want to correct me on anything I’ve written here, PLEASE do…I want to simplify the medicine. I do NOT want to be wrong about medicine.  Use the green button below to email me your thoughts.

How does the VA calculate disability compensation for a knee replacement?

As of July 16, 2015, the VA must rate both Total and Partial Knee Replacements the same – using Diagnostic Code 5055. (The VA appears to be pushing back against the Fed Circuit a bit here…..see the Addendum, below)

100%:   For 1 year following implantation of prosthesis

60%:    With chronic residuals consisting of severe painful motion or weakness in the affected extremity

Let’s break that table down and explain it simply.

For one (1) year after your partial or total knee replacement, you should be rated at 100%.

After that, the VA can rate in one of 2 ways: if the residuals are chronic, the rating will be 60%.

So, 1 year after the partial or total knee replacement, the VA will look to re-rate your knee condition.

Whether you get a 60% or a 30% minimum plus analogous residuals depends on whether the residuals are “chronic” or “intermediate”.

The VA Impairment Rating Tables are not a bastion of clarity, and this situation is not any different.

Whether residuals are “chronic” or “intermediate” is going to turn on the facts of your case and medical record.

So it is very important to document – using lay evidence – the frequency, chronicity and severity of any symptoms in your knee joint (as well as the hip and foot) in the year following your surgery….it is this lay evidence, plus any objective documentation of limitations of range of motion, painful motion, and more, in your  medical records, which may make the difference between a 30% or a 60% rating 1 year after your VA total or partial knee replacement surgery.

This Level of VA disability compensation for a Knee Replacement is ALWAYS Wrong.

If the VA rates you at 10% following a partial or total knee replacement, they are wrong, and you should consider challenging that rating with a Notice of Disagreement.

Notice, above, in DC 5055 that there is NO 10% rating level for a partial or total knee replacement.

So for the VA to rate you at 10% following a service-connected total or partial knee replacement they have to either ignore the law and regulations, or use the wrong rating criteria.

Either way, they are wrong.

There are very few ‘absolutes’ in Veterans Law, but  this is one of them.

Do not EVER accept a 10% rating as your amount of VA disability compensation for a knee replacement: whether it is partial or total.

What is the current state of the law on rating Total and Partial Knee Replacements?

In May 2016, the Federal Circuit Court of Appeals affirmed the rating process explained in this post.  You can read the Court’s decision here – it begins with a jurisdictional question (whether the Fed Circuit has jurisdiction over a CAVC Remand Order) which it narrowly resolved in this Veteran’s favor.

What’s interesting about the decision is that the Fed Circuit called out the CAVC for  what it very politely called a “stretch” in logic.   Here’s how.

The CAVC decided that the VA could not rate a Partial Knee Replacement using the same diagnostic code as a Total Knee Replacement because every part of the knee was not replaced, and the rating criteria DC 5055 excluded a less than total knee replacement.

The Fed Circuit didn’t buy the VA’s arguments, finding them light on support in the facts; the Court pointed out that the majority of BVA decisions actually concluded exactly the opposite…a fact conveniently overlooked by the CAVC and the VA.  (In truth, the VA didn’t overlook it, they just made some sort of argument that the BVA had gone rogue, or some similar rejection of Agency responsibility).

The VA argued that DC 5055 was unambiguous in excluding Partial Knee Replacements from its rating criteria.

However, while on appeal, the VA published “Interpretative Guidance” explaining this point and seeking to clarify that DC 5055 did not apply to partial knee replacements.

The Fed Circuit said “Not so fast, VA”…you can’t argue something is clear while (self-servingly) releasing guidance that purports to clear up an ambiguity  on the same issue you argue is unambiguous.

As promised, here are the additional rating tables for those seeking to rate intermediate residuals of a partial or total knee replacement for the purposes of VA Disability Compensation:

On November 21, 2016, the VA revised its Manual M21-1MR to – allegedly – reflect changes in processing of Partial Knee Replacements post-Hudgens.

In short, here’s what they did – they are basically only going to re-rate claims that were filed before the effective date of the new regulation (July 16, 2015) and that are still pending.

For those that were filed and finally adjudicated before this date, they are likely going to reject CUE claims because the Fed Circuit found that the old reg was ambiguous, and therefore not “clear and unmistakeable error”

The one I really disagree with – absent further study – is the first scenario:  where your partial knee replacement claim was filed and decided on/after July 16, 2015.

I see no logical reason that the change should not apply to these decisions.

In fact, the VA’s explanation for that rule was expressly disallowed in Hudgens – while the VA is correct that the 38 CFR 4.71a revision occurred, the Court struck it down to the extent it excluded partial knee replacements, as it was issued as a “convenient litigation position” and not entitled to deference.