What is the VA appeals modernization process? 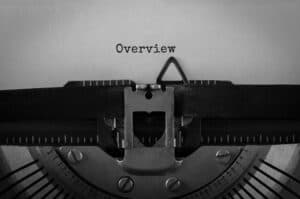 In this post, I’d like to provide an overview of the major changes to the VA claims process under “AMA” or the VA Appeals Modernization Act.

AMA centers on structural changes to the old VA appeals process, which the VA is now calling the “Legacy VA Appeals process”. The new AMA system looks nothing like the old Legacy system.

This post covers the major structural change – the 3 choices of appeals you will have under the new system.

But first, a brief “refresher” as to what VA Appeals Modernization is.

Refresher – What is VA Appeals Modernization?

Let’s take a look back at what VA appeals modernization is and how the AMA came to pass.

So we know that over the past 7 decades, there has been a massive and perpetual backlog of VA claims and appeals. Veterans struggled to pursue their claims because the system was so bound up in red tape.

Every new President would start talk of fixing the Department of Veterans Affairs and the VA Claims and Appeals backlog. That energy and enthusiasm would quickly fizzle out once they figured out the legislative gauntlet that had to be run to make any kind of change happen. So they just denied a ton of claims, and told everyone that they were getting faster.

The VA counts claims and appeals separately, so denying a ton of claims and kicking them up to the Board of Veterans Appeals made their VA Claim statistics look better. And vice versa with the BVA. Some veterans gave up, others filed appeals.  So many filed appeals that the appeals system began to backlog.

It was so bad that back in April 2018, if the VA took in no new appeals, and worked around the clock to issue decisions at their current pace, it would take until 2026 to clear out the backlog.

The BVA would blame the VA Regional Offices, the VA Regional Offices would blame the VA, and the veteran was left running in a Hamster Wheel for 8, 10, 12 years to get benefits in many claims.  People used to say that the VA was an example of how government didn’t work – but in reality, they were an example of what happens when we don’t update our infrastructure – whether roads, bridges, broadband internet or even federal benefits.

The VA Legacy system was conceived in the 1930s, upgraded in the 1960s, ignored in the 1990s, complicated in the 2000s, and so on. But here’s the thing the VA still doesn’t seem to get: veterans in the 21st century have very different problems than vets from 90 years ago, and the VA claims and appeals system never adapted to absorb those differences.

By 2010, the rational response to the VA’s claims and appeals circus would be to acknowledge that the VA was incapable of identifying, no less solving, its own problems.

The sane person would admit that the entire VA benefits system was broken and needs to be gutted and rebuilt to match the needs of a new era of veteran.

But instead, when the topic of veterans appeals improvement came up, Congress decided to go “once more into the breach” with the VA and after 2 years of negotiating with VSOs, advocacy organizations, and the veterans community, in 2017 passed the VA Appeals Modernization process in a law known as the Veterans Appeals Improvement and Modernization Act of 2017 (Click here to read the full original text of the law).

This legislation is the single most significant piece of Veterans Benefits legislation to come out of Congress since the Judicial Review Act in the 1980s, and it is changing VA claims and appeals – as well as veterans law – dramatically. Some of that change is good, and refreshing. And some of it is mind-bogglingly frustrating.

The sales pitch for the AMA legislation was that it would put massive structural changes into place so that the veteran would have more choice in challenging benefits denials.

The reality is a little different: VA has “gamified” the VA claims process.

After 2 years of experiencing the AMA system from all levels – a claimant, an attorney at the BVA, attorney at the Veterans Court and Federal Circuit – I feel confident in saying that navigating the AMA claims and appeals system is like playing chess against Gary Kasparov…on one hand, its cool to watch a chess game played that fast,  on the other hand, you just got wiped out in 2 moves.

This changes only apply if you are issued a VA Rating Decision after February 19, 2019, or unless you opted in under a program called “RAMP” which the VA used to test the new AMA system.

If you are dealing with a decision before February 19, 2019, and you did not optin to the RAMP process, you have a Legacy appeal and are still working under the procedure and rules of the old system.

Clear as mud? Let’s get an overview of what has changed in the VA appeals process because of AMA. 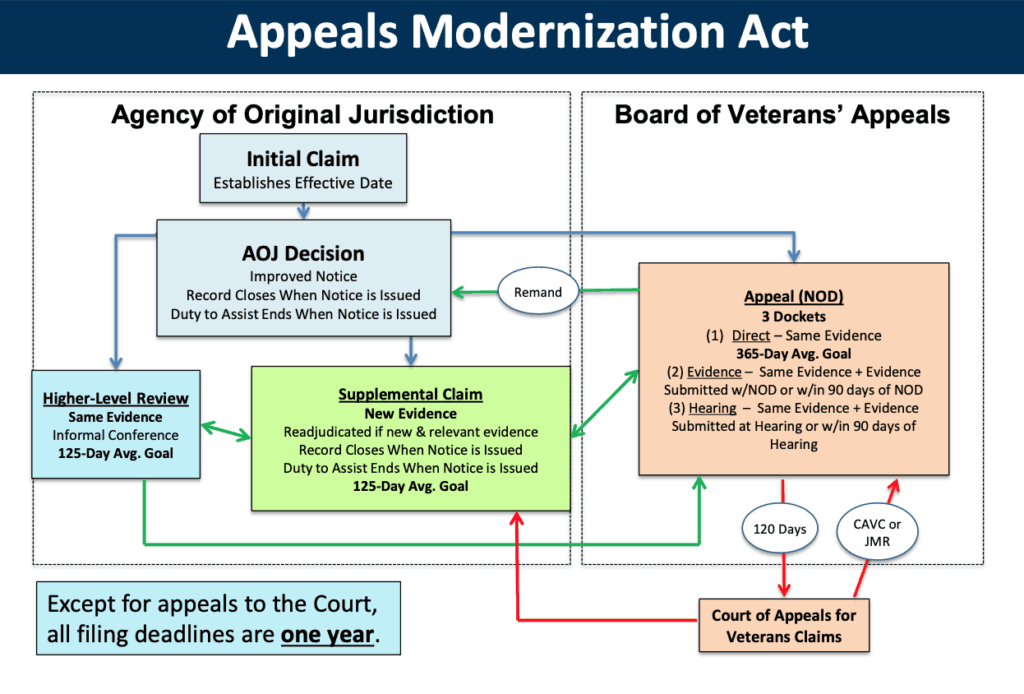 Under the new VA Appeals Modernization process, once the VA issues a rating decision, you get 3 appeal options. And that’s as easy as it gets folks.

If you aren’t satisfied with the decision and want to challenge it or try to get it fixed, you will have 3 options to consider:

Option 1: File a Supplemental Claim (The concept behind the supplemental claim is similar to a reopened claim under the Legacy system).

Option 2: Seek a Higher Level Review (The higher level review is similar to what DRO conferences were under the Legacy appeals system).

Option 3: File your Notice of Disagreement (Appeal to the BVA).  This is a heavy decision because you then have to choose which of the three lanes of BVA appeals you want to take.

Let’s take a little closer look at those 3 options.

If you do not get a favorable decision in your VA claim, and believe that with additional evidence the decision would be different, you can file a Supplemental Claim on VA Form 20-0995.

The Supplemental Claim is the grenade pin of the whole VA Appeals Modernization plan. If it works, the plan works. If it becomes just another tool to delay and deny, this system will collapse into itself very quickly.

Under the AMA statute, you will be able to file a VA Supplemental claim any time after a ratings decision.

However, there are two “caveats”:

First, to  properly file a supplemental claim, you will have to send it in with “new and relevant” evidence (which Congress has asked courts to construe in the same way as they did the phrase “New and Material evidence”).

Second, if you file the Supplemental Claim within 1-year of the VA Rating Decision, you will continue to get the effective date of the prior claim.

This is called continuously pursuing the claim.

There is no limit to the number of Supplemental Claims you will be able to file, although I presume that it makes sense to file only one per medical condition at a time.

VA Supplemental Claims must always include new and relevant evidence as to the element for which the prior claim was denied.

A Supplemental  Claim can be filed after any VA adjudicatory action issued after February 19, 2019: VA Ratings Decision, BVA Decision, even (as the statute is written) CAVC decisions. And if the VA issues a Statement of Case or Supplemental Statement of Case in a Legacy Appeal, you can opt-in to AMA with a supplemental claim (be careful, you’ll still have to add new and relevant evidence).

Of all of the options in the VA Appeals Modernization process, the VA favors this option, and it’s easy to see why.

If done in a certain way, and with a certain subset of veterans (those who don’t know the system or don’t hire an advocate to help) the VA can deny a veteran or survivor’s claim and appeal forever, without ever giving the veteran a viable option at judicial review.

If you are not satisfied with your VA Ratings decision, but have no new and relevant evidence, under the VA Appeals Modernization process you will be able to request what is called a “Higher Level Review” using on VA Form 20-0996.

The Higher Level Review consists of a review by a senior rater; you can request a hearing with a senior rater, now known as the informal conference. The rater may be at the same or different office as the original decision, as the VA has completed its shift to the National Work Queue, where work is assigned to the next available employee, irrespective which VA Regional Office serves the veteran.

The senior rater in a HLR can do three things: 1) continue the prior decision’s denial, 2) return the decision to the prior VA rater to fix an error, or 3) grant the benefit sought.

There are a couple of things that can merit a “return” in an HLR review: duty to assist errors almost always will merit a return to the VA, and legal errors. The ability to get a return on an HLR through the legal error will depend entirely on the knowledge and experience level of your HLR reviewer, and your ability to simply lay out the issues to the rater.

The VA can deny a request for a Higher Level Review for good cause shown.

If you don’t want to file a supplemental claim or higher level review, under AMA your third choice is to file a Notice of Disagreement on VA Form 10182. That form is filed directly with the BVA (look at the address on the instructions for the firm to make sure you send it to the right BVA address).

When you file your appeals to the Board, you then have the ability to choose from three BVA appeal lanes. (The BVA will maintain 4 different dockets – one for each of the AMA lanes and one for Legacy appeals).

Lane 2: Evidence Lane: In this lane, you have 90 days from the BVA’s receipt of your Notice of Disagreement to add any additional evidence into your appeal. At that time, the record at the BVA will close, and the BVA will conduct its review.  Again, arguments are not evidence, so feel free to provide a letter brief or any other argument as to what you are asking the BVA to do.

Lane 3: Hearing Lane: In this lane, you will have a BVA hearing, and then 90-days after the hearing to get any additional evidence into the record. BVA Hearings will be by video as a default, but veterans and advocates may be able to request a different kind of hearing.

Notice what is missing?  That whole goofy Legacy Appeals process where the veteran had to perfect an appeal by filing a NOD, waiting for a Statement of Case (SOC) and filing a VA Form 9 Substantive Appeal. Under AMA, you file a form and choose your lane.

There is something else missing, too.

Honestly, though, the BVA never took the Duty to Assist seriously, and the smarter veterans and VSO and attorneys would seek out what I call “5 Star Evidence” to prove up their own claims and appeals.

How did claim and appeal deadlines change under AMA?

Not much changes here. You still have one-year to appeal a VA Ratings decision to the BVA or to choose one of the review options at the AOJ (Agency of Original Jurisdiciton)

You still have one year after you file a Notice of Intent to File to file an original claim for a benefit.

First, if you want to learn more about the AMA appeals process, the Modernized AMA Appeal process Course is available free to all monthly and annual subscribers.

I’m working on organizing my thoughts, and talking to other VSOs and attorneys to get a sense of how they feel AMA is going, and I’ll post about it soon.