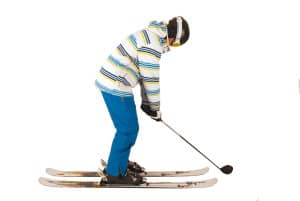 Used to be that when you needed to get a VA Disability Claim form started, all you had to do was drop a letter in the mail to the VA Regional Office (send it certified mail if you were really smart and knew the VA regularly lost your letters), and that was all you had to do.

In trying to make the VA claims process easier, the VA has actually made it a bit more challenging.

There are several new VA Disability claim forms that Veterans must consider whether or not to use.

I’m not going to cover them all in this post -today I just want to talk about the VA Form  21-0966: Notice of Intent to File a VA Disability Claim Form.

How to File your Notice of Intent to File a VA Claim Form.

Here’s how it works – allegedly.

You want to file a VA claim.

You go online, and see this neat little opportunity the VA gives you – the opportunity to file your Notice of Intent to File a VA Claim (VA Form 21-0966).

Because the ONLY reason that the VA has a Notice of Intent to File a VA Claim is to cull out a few more claims.

To do less work. To help fewer Veterans. And, at the same time, to beg Congress for MORE employees to handle the flood of non-claims.

Let’s do the math.

Let’s say 100 Vets might get online and file a VA Claim form in a given time frame.

That’s 100 VA Claims that the VA has to develop and decide.

“Too much work,” Joe Bureaucrat says. “There has to be a  way to reduce these claims.”

Enter our Superhero – the mysterious Champion of Bureaucracy, the Perpetuator of Unnecessary Jobs, the Prolonger of Inefficient Systems…. Mr. Red Tape.

“Here’s the Solution to your Workload Woes, dear Government Bureaucrat,” Mr. Red Tape says.  “Create a form that allows Veterans to File a Notice of Intent to File a VA Claim. Make them affirm that it’s NOT a VA claim, and give them a year to complete their claim by filing an actual VA Claim.”

“Well,” says Joe Bureaucrat, “I see how that gives us job security – we have a whole new form to process.  But how does that reduce our workload?”

Mr. Red Tape smiles, with a twinkle in his eye. “Because if half of the Veterans that would have filed a VA claim file a Notice of Intent to File a VA claim, and half of them fail to file a VA Claim in time, then you have reduced the number of VA Claims you have to process by 25%.”

And it is deviously brilliant.

Because a good number of Veterans will die in the year following the filing of their VA Claim.

A good number of Veterans will go into the hospital for surgery, inpatient care, or extended psychiatric treatment within a year of filing their VA Claim.

(I bet I’ve seen 200 or more cases in the first half of 2015 where the Veteran missed a scheduled C&P Exam because they were in surgery, convalescing, or locked behind the VA’s Psychotropic-Drug-Infused walls).

And that’s not even the evil part.

If you use VA Form 21-0966, the VA is asking you to file a claim that stands a good chance of never getting decided.

One of the necessary  elements of a VA Claim is the notice of intent to claim benefits.  As the Veterans Court famously said in the 2009 Brokowski case:

So, if you tell the VA those 3 things, then you have filed a VA Claim.

Does it express an intent to apply for benefit?  Check.  In clear writing at the top of the form.  It’s the name of the form, in fact.

Does it include an identification of the benefits sought? Check.  First set of boxes ask you to identify which of the 3 major VBA Benefits you seek: Pension, Compensation, or Survivor benefits.

And is it in writing? Check.  Unless you find a way to fill out this form without writing on it, that is.

So we can agree that VA Form 21-0966 is a Claim for Benefits, as a 3 Judge Panel of the Veterans Court defined the elements of a Claim  in Brokowski (and others before Brokowski).

Then who can explain why a Veteran has to acknowledge on the VA Form 21-0966 that this is, for all lawful purposes,  NOT a VA Claim?

Here’s the acknowledgment you make when you sign a form that meets ALL of the elements of a VA Claim…..:

“I acknowledge that: (1) this is not a claim for benefits”

Here’s Why the VSOs Tell You to Fill Out This Form.

The VSOs will tell you to  file the Notice of Intent to File a VA Claim to “bookmark the earliest effective date possible.”

I know this to be true.

In writing this post, I called 15 random VSO offices – representatives from random offices in DAV, VFW, American Legion, the Paralyzed Veterans of America, and a couple random County Veterans Service Officers in Texas, California, and Florida.

Every single one of the 15 I called said the exact same thing: “You file VA Form 21-0966 to protect the earliest possible effective date.”

About halfway through those calls, I was getting kind of bored hearing the same response…

I asked: “Why wouldn’t I just file VA Form 21-526ez and later argue that a previous communication to the VA was an inferred claim?”.

Most of those VSOs asked the followup question responded with some variation of: “I don’t know, what’s your claim number and I’ll look it up.”

But 3 of those VSOs gave me answers that convince me that using untrained VSOs is like playing Russian Roulette with your VA Claim:

“What’s an infernal claim?” (Seriously, a VSO asked me that question!!)

“There is no such thing as an inferred claim. Are you talking about an Increased Claim?”  Horse Puckey – to learn more about Inferred Claims, read here.

“Because your earlier claim is just a Notice of Intent and it would be invalid because the VA requires you to use a specific form now.” (I don’t even understand that mouthful of circular logic….do you!?!)

If a VSO – or anyone – tells you to file a VA Form 21-0966 to preserve your earliest possible effective date, ask them this:

If I used VA Form 21-0966, how would I get an earlier effective date than I would by submitting VA Form 21-526ez, and sending in all my evidence in 90 days before the VA even sends out its first Duty to Assist letter?

The REAL answer – your effective date wouldn’t change one bit.  (Unless you had a claim that came under Nehmer – there’s some really interesting ways to use the Nehmer case to get you an effective earlier than any other Veteran can get.)

As an aside, you CAN learn how to file a VA claim in 90 days….take a look at my training video, ebooks, and workbook, and discover how to prove up your own VA Claim.   Every week I hear from Veterans that used this video to get a claim granted in under 3 months.

Just so you know, some folks will tell you to use VA Form 21-0966 to file a Notice of Intent to File a Claim for another  Veteran if you are a family member, friend, caretaker, etc.

And others – including the VA – will tell you that this form replaces the “informal claim”.

I’ll be talking about the “informal claim” very soon.  Here’s a preview of my thoughts on the “Informal Claim”….it’s the Loch Ness Monster of VA Claims.

Unless its just confusion about an “Inferred Claim”, or unless you are talking about an informal claim for increase in VA compensation, there’s not a soul in the world that knows what an “Informal Claim” is.  Doesn’t even exist, in all likelihood.

Stay tuned for more on that!

I won’t file this in one of my claims, and I won’t advise my clients to ever submit this form – absent a compelling argument of a vital need to fill it out.

Any form that is this deceitful has “danger” written all over it.

Now….a word of caution….this is MY opinion, and not legal advice.

Just because I’ve written the Veterans Law Blog for 8 years, and just because I’ve had a lot of training and experience filing VA appeals doesn’t mean that my OPINION is right for YOUR claim.

I am totally serious about that.

Read other websites – the VA, other VSOs, attorneys…read a lot of other stuff.  See what everyone is saying, consider all of your options, and then make your own decision about what is best for you and your own claim.

But if someone suggests that you file VA Form 21-0966, you might want to ask if they have malpractice insurance if things go wrong by filing this form instead of VA Form 21-526EZ.