VA Appeals Modernization Act – the pros and cons of choice. 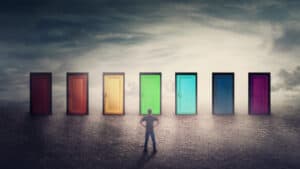 The prototypical feature of the VA Appeals Modernization Act is, unquestionably, choice.

Choice gives one a sense of power or of control. When one has the ability to choose, he or she feels more in control of their destiny in things small and large.

Think about that – when you make a choice as simple as what school to send your kids to, or what clothes to wear today, you get the sense that you are in control of your family, or your day.

As much as I like choice, there’s one time it concerns me. I am always concerned when the government, in delivering a service or a benefit, offers choice. Often times, that choice is an illusion of control, meant to give an individual the perception that they control their destiny. Other times, that choice is a mask for treating people very differently in a common scenario.  And, in still other scenarios, choice is a tool that those in power use to dilute their responsibility: if a citizen chooses option 1 over option 2, and things go bad, it can be attributed to the citizen’s choice, not to a flaw or defect in the program or delivery of services.

That’s what scares me most about this VA Appeals Modernization Act – there is too much choice.

I worry that the choice is meant to dilute the VA’s responsibility for fixing the systemic flaws in the delivery of services and benefits to the men and women leaving military service and attempting to reintegrate into civilian life. I worry that the choices being provided are meant to give the veteran the illusion of control over the processing of his benefits appeal, making it less likely that the VA will be blamed when the claim is denied, or the appeal takes years or is forgotten or lost in the labyrinth of VA bureaucracy.

The antidote for this problem is education.

As we move forward in this blog – and as the Veterans Law Blog changes along with the VA appeals process – we need to keep one thing in mind:

When the VA denies a claim – whether an original claim, an increased compensation claim, a so-called TDIU claim, or a survivor benefits claim – the veteran or surviving spouse (or child) will be faced with a massive choice: whether and what type of appeal to file.

I want to walk you through the options that comprise this choice.

But before I do that, I have a warning that should govern every choice you make under the new VA Appeals Modernization Act, every article or blog post or video or podcast episode you read or see or hear, and every offer you get from a VSO, attorney, or even the VA.

This law has only been “in effect” for two years (since February 2019).

The VA, attorneys, VSO’s, veterans and myself – have any idea of the best way to navigate through this system.

It is a massive change, and it will take years to sort through the various options, see results (or the lack of them) that allow us to evaluate the various paths and determine the pros and cons of each in a variety of scenarios.  We all have ideas about how to better navigate the VA appeals process under the new VA Appeals Modernization concept – some of them are quite intriguing and promising while others are horrifying and deeply concerning – but none of us have any reliable proof that one option or path is better or worse than another. We are all going to have to figure this out together.

With that warning in mind, let’s take a look at the choices that you have when the VA denies a claim for a service connection benefit under the VA Appeals Modernization Act.

Choice 1: Accept the VA’s decision and move on with your life.

I’ve seen a lot of lives changed for the better – and the worse – by protracted engagement with the VA. As long as you have a reliable and objective sense of the benefits you are entitled to, and clearly define the outcome you seek (not changing it along the way), most veterans will experience positive outcomes and changes over time. If you go into the appeals process with the expectation that you have a “million dollar claim” because you were diagnosed with a condition the day after leaving service 40 years ago even though you have never filed a VA claim in your life, you are very likely to have a bad experience under the new VA Appeals Modernization process. Admittedly, those are the extremes – most veterans have an experience somewhere in the middle.

So, before making this choice, here is the critical question you must take time to research, contemplate and answer:

Have you talked to enough DIFFERENT people (a few fellow veterans, a VSO or two, and a handful of attorneys) to make sure you have a “reliable and objective” sense of the benefits you are legally entitled to and the likelihood that you will recover them.

Choice 2: File a “Supplemental Claim” with the VA Regional Office.

The VA has issued a new supplemental claim form  – you can download a copy here.

One thing that I really liked about the so-called “Legacy” VA appeals process was the concept of a DRO – a Decision Review Officer. The VA had a great plan – a TRULY great idea – where veterans could meet face to face (on or off the record) with a senior VA rater to discuss the VA’s denial of the claim. Often, these DRO conferences would result in a reversal of the denial, a discussion of what evidence the VA really needed to grant your claim, or an accelerated entry in the Legacy VA appeals system.

Higher Level Review is NOT that. This is NOT the DRO process.

In the Higher Level Review process, your claim and (presumably) your file will be dropped on the desk of a senior VA claims rater who will review it for error. They do not have to give deference to the prior VA denial – they can make their own decisions, whether it is different or the same.

But you cannot submit new evidence or argument. You cannot meet the official performing the Higher Level Review (although you can request an informal phone conference on the HLR Form, there is no guarantee you’ll actually get one). This is, truly, the exact opposite of the DRO process. It is, in my opinion, the “man behind the curtain” in control of your claim or appeal, with no input from you.

Now, recalling my warning above, I may be 100% wrong. The Higher Level Review may become the greatest thing since the Army issued the Beef Ravioli MRE. Or it may be like eating Chili Mac before going into the tear gas tent at basic training.

Choice 4: Appeal to the BVA.

This is where things start to get a little more murky.

On the positive side, if you appeal to the BVA, you do not have to go through the multi-step process of appealing that was the prototypical defect of the Legacy Appeals system (Notice of Disagreement + Statement of Case + VA Form 9 + VA Form 8 Certification).  Now, you will need to file a Notice of Disagreement form and select one of three “appeal lanes.”

BVA Direct Lane: This VA Appeals Modernization appeal lane will consist of an appeal and a decision by the BVA. There will be no hearing. There will be no new argument, there will be no opportunity to add evidence. The BVA is promising that this lane will have priority over everything else (although sharing priority with the Legacy Appeals Hearing Lane). Frankly, it has to, or it will not succeed. Here’s why: medical conditions change, and if word starts spreading that the BVA cannot process appeals for increased rating for PTSD or Sleep Apnea, for example, faster than those medical conditions change, there’s not a reasonable veteran in the world that would chose this option. So, in the light of the warning above, this BVA appeal lane seems to be all about “speed.”

BVA Evidence Lane: This VA Appeals Modernization appeal lane will allow veterans to submit evidence only to their appeal – there will be no hearing. This lane is similar now to the approach most attorneys take in presenting their client’s appeals to the BVA: prove up the case with medical and lay evidence, add an argument applying the law to the evidence, and push the BVA to issue a decision without a hearing. It is an incredibly effective approach so long as you know what evidence to add to prove your appeal.

BVA Hearing Lane: This VA Appeals Modernization appeal lane will be for veterans who absolutely want their “Day in Court.” Except there is no Court, and you won’t get anything close to a day. Maybe an hour, by video-conference in most cases, to present your position to a BVA Hearing Official who may or may not be the Veterans Law Judge who writes the decision in your appeal. This lane will take the longest, for sure, because there are only 91 Veterans Law Judges (with nominations for 8 more growing cobwebs in an inbox in the Oval Office), and close to 50,000 legacy hearing requests (as of 2018 there were 80,000) already in the queue. With the hearing lane, however, you will have a choice of times when you can add new evidence – within 90 days of your appeal, or within 90 days of your hearing.

BVA Legacy Appeals Lane: If you keep your appeal in the Legacy Appeals system, you will stay in this BVA decision queue. It will be long, slow, and the quality of the decisions will likely be pretty poor, as the BVA tries to push out as many decisions as possible to drain their docket to make room for appeals under the VA Appeals Modernization Act.

The analogy that was most commonly used to pass this 3-lane process at the BVA as part of the VA Appeals Modernization Act was the idea of “traffic lanes” on a busy highway in a city. The “Direct Lane” is the HOV lane, the Hearing Lane the far right lane that moves the slowest and is the most frustrating.

But, like HOV lane systems on the highway, your success or failure will turn on the resources, knowledge and ability you have.

If you are a single person, who works alone and knows very few people that share the same commute, you will never experience the speed and convenience of an HOV lane.  Likewise, if you are a veteran with scant knowledge of the law, no understanding of evidence, and a very subjective faith in the strength of your appeal, you will likely find the faster “Direct Lane” to a BVA appeal to be a dangerous and deadly place.

My point is this: the success Veterans and their survivors will have in BVA Appeals under the new VA Appeals Modernization Act will turn on their knowledge, education, focus, ability to dedicate time to understand the system and prove their appeals, or their ability to hire the right kind of advocate for their BVA appeal.

By providing so much choice to Veterans, the VA has built a system of plausible deniability, in which they can blame delays on veteran’s choices, not the systemic failures of the agency or its benefits process and conceptualization. VA accountability could very well decrease, and it is likely that we will not see a change in the BVA appeals process – all other things being the same – for another 50 years.