5 things to know about the new AMA Notice of Disagreement rules. 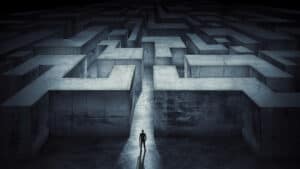 Used to be the only way to challenge a VA rating decision was to file a Notice of Disagreement. Effective February 2019, though, the VA appeals system changed with the passage of the Appeals Improvement Modernization Act (AMA). Now,  the “ins-and-outs” of filing the AMA notice of disagreement is a bit trickier.

However, that is where the similarities end.

Under the Legacy appeals system, a NOD was the first step in appealing a VA Rating Decision to the Board of Veterans Appeals (BVA). There were several other steps required to perfect that appeal in the VA Legacy appeals system – you can click on the linked text to read about things like the Legacy Decision Review (DRO) process, the Statement of Case, the VA Form 9, etc. That process could take 3 – 8 years, if you were lucky.

Now, we don’t know how long we should expect BVA appeals under the AMA system to take – there just isn’t enough data right now to make an accurate prediction.

But we do know that appealing to the BVA under the AMA appeal process requires far less paperwork than a BVA appeal under the Legacy process.

So let’s dive into the process of filing a Notice of Disagreement in the AMA appeals process.

1. When to file a Notice of Disagreement in the AMA appeals system.

So the timing for filing a Notice of Disagreement under the AMA appeals system has not changed.

The safer course of action, though, is to aim to have your appeal received by the VA within one year of the date on the VA Rating Decision itself.

These appeals are hard enough, and take long enough already that it makes no sense to add issues of “timeliness” of your NOD to the mix.  So plan ahead, and get your NOD filed on time.

Under the Legacy appeals system, a NOD was filed using VA Form 21-0958. Because that form could only be used to appeal a Legacy ratings decision issued before February 19, 2019, effective February 18, 2020, the BVA no longer accepts this NOD form, unless you requested and received and extension to file the notice of disagreement (something that is very, very rare)

The correct AMA Notice of Disagreement form to be used for all VA Rating Decisions issued after February 19, 2019, is VA Form 10182. This is a much more straightforward appeal form, but I’m working on a video walk-through of that form that I will be able to post on the blog soon.

Under the Legacy appeals system, all that was needed in a Legacy Notice of Disagreement was an expression of dissatisfaction and an indication of an intent to appeal. Until March 2015, a NOD form was not even required. Before that date, you could file a NOD on a VA Form 21-4138, and so long as it had the two elements I just mentioned, the BVA was required to construe that document as a NOD.

The legal elements for what constitutes a NOD are very different under AMA Notice of Disagreement rules.

First, the AMA statute written by Congress requires that “[n]otices of disagreement shall be in writing, shall identify the specific determination with which the claimant disagrees.” 38 U.S.C. §7105(b)(2)(A). I think this will end up meaning that we have to specify in our AMA notice of disagreement whether we are appealing a decision that a condition is not a service connected disability, the impairment rating for that condition, or the effective date.

It is probably safest if you just copy and paste the wording of the VA determination from the ratings decision, although I cannot say with certainty that it is always required or necessary. We are still learning what does and doesn’t work in this new system.

Second, a NOD under the AMA must be filed on VA Form 10182.  The Veterans Court and the Federal Circuit are consistently reinforcing the VA’s move to form-based appeals processing, so the VA will most likely ignore anything you send trying to appeal a VA Ratings Decision that isn’t on VA Form 10182.

You’ll notice, for example, that the BVA is looking for a very specific definition of the issue you are seeking to appeal on VA Form 10182.  Compared with the broader “issue on appeal” language in the VA Form 21-0958, this is a change that a lot of veterans are going to struggle to get used to.

Third, an AMA Notice of Disagreement is filed directly with the BVA. Under the Legacy process, the NOD was filed by mailing the NOD to the VA Evidence Intake Center (EIC), and before that, to a VA Regional Office.

Under the AMA process, you have to mail your AMA Notice of Disagreement directly to the BVA – read the instructions on VA Form 10182 very carefully to understand this and other specific requirements on the form.  I’m not sure if the Courts will permit the practice, but right now the BVA is not processing appeals that aren’t sent directly to the BVA.

3. There are three types of BVA Appeal Options under AMA appeals system.

So one of the key features of the new AMA appeals system were the variety of ways that a veteran could challenge a VA Rating Decision.

Two of those options keep the claim and appeal at the regional office level: they are not BVA appeals. First, within one year of a VA Rating Decision, a veteran can file a supplemental claim with “new and relevant” evidence. Second, within that same year, a claimant can file a request for Higher Level Review. These are NOT appeals to the BVA.

It is still WAY too early to attempt to define how to best use all of these options. It will take years, or maybe decades, to really understand the strategic and tactical pros and cons for each of these options. Generally – and that is as far as I am willing to go on this assessment – what I am seeing is that these regional office level options (supplemental claim and/or higher level review) may be worth considering if you still need to develop or identify evidence in support of your claim that you can provide or that the VA should have assisted you in obtaining.

If you choose to appeal to the BVA instead of filing a supplemental claim, you have to make an extra choice: which BVA appeal lane will you choose?

But, in the evidence only lane, you will not get a BVA hearing.

In a BVA hearing appeal, you can submit additional evidence to the BVA and have a hearing before a veterans law judge.

The record in this appeal lane does not close until 90 days following the hearing. So you can submit additional evidence at your hearing or within 90 days after the hearing.

4. How do you choose which BVA lane to select?

It is too early to know the pros/cons of each ‘lane’ at this time.

The safest approach is to spend time studying what other folks are saying – especially lawyers and VSOs who spend a lot of time making these decisions in a variety of cases. Even still, you need to evaluate what other folks say in light of your appeal’s unique circumstances. Be wary of anybody who tells you that they have figured the AMA out, though…it is far too early to develop any general principles or guiding rules of the AMA appeals system.

Having said that, I am learning some very important information from how the VA’s Office of General Counsel are handling remands of BVA decisions by the US Court of Appeals for Veterans Claims.

For example, when the CAVC vacates and remands a BVA decision in an AMA appeal, the OGC believes that the appeal should return to the same lane from whence it came.

That means that if you filed a direct BVA appeal, it returns to that lane on remand from the CAVC. If you filed an evidence only appeal, the CAVC remand returns your appeal to that “lane.” It’s a distinction without a difference, near as I can tell. Because the record on appeal at the BVA is almost always going to be closed by the time an erroneous BVA decision is vacated and remanded from the CAVC, the OGC’s interpretation treats every appeal, on remand, as if it were a direct appeal.

But here is one thing I do know for sure.

You should spend some time considering whether a BVA appeal is the best option for you to challenge a VA Rating Decision, or if you should choose another path like an HLR or a Supplemental Claim.

Don’t misread that last sentence. I’m not saying a BVA appeal – or any of the AMA Notice of Disagreement review options – are good, bad, better, or worse. I’m saying you need to put some thought into choosing how to deal with an adverse VA rating decision, because there are many, many traps for the unwary.

What the VA pitched to Congress as choice is starting to sound a lot more like the shell game played in the back alleys of any big city.

5. The AMA Appeals Process is shifting the power centers inside and outside the VA.

Here’s another thing I know for sure.

AMA is going to drastically change the role – and the power – of the BVA and, by extension, anyone who interacts with the BVA in the veterans disability scheme (i.e., attorneys, VSOs, the Veterans Court, veterans/survivors, etc.)

I’m going to explain what I mean in a future post.

In the meantime, we all need to change our mindset about the VA, BVA and disability compensation appeals.  The system for appealing benefits decisions has changed so dramatically that there will be ripple effects for years and decades to come.

The power and role of the Veterans Court in reviewing Board decisions will be redefined, too, although that will take longer.

And the role – and availability – of quality advocates at various stages will change, too.

My hope is that most of these changes will be for the better. When it comes to the VA, “Hope Springs Eternal” has always been the best long term mindset. I think that is particularly true as we start to figure out whether the veterans appeals improvement ushered in by the AMA is or is not helpful to accomplishing the number one goal of every veteran: trying to reintegrate into civilian life.

But the reality is this: nobody knows what the next 5 – 10 years of veterans law has in store for us. We are truly in uncharted waters.

We cannot make assumptions about the system, the rules or the law in the same ways that we used to.

But we have something that other veterans have not had when the VA made major changes to the claims and appeals process: we have judicial review. So long as AMA doesn’t sterilize or stifle the nascent power of the Veterans Court, things will probably be all right in the long run.

Let me know what questions you have about the AMA notice of disagreement in the comments below.