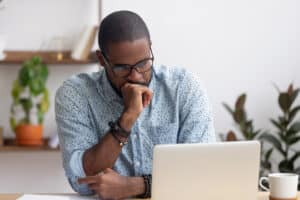 This post is part of a two-part series summarizing the so-called “Gulf War presumption” of service connection. You can click here to read the first post.

What is a Qualifying Chronic Disability?

To get the presumption of service connection for Gulf War syndrome, a veteran must prove that he has a qualifying chronic disability.

This means either that the veteran has an undiagnosed illness, or a “Medically Unexplained Chronic Multisymptom Illness [MUCMI] that is defined by a cluster of signs or symptoms, such as chronic fatigue syndrome, fibromyalgia or functional gastrointestinal disorders (excluding structural gastrointestinal diseases).

We are going to look at each component of that definition: 1) what is an undiagnosed illness; 2) what is a MUCMI; and 3) what is the difference between functional and structural gastrointestinal disease?

(8) Signs or symptoms involving the respiratory system (upper or lower).

If you have proved that you meet the eligibility criteria (see Part 1), and  establish that you have an undiagnosed illness, the inquiry ends there; you are entitled to the Gulf War Syndrome presumption of service connection.

So, that begs the question: what the f**k is a MUCMI?!

Veterans law is loaded with acronyms created just for the sake of having an acronym. At least that is the case with a “MUCMI.”

A “MUCMI” is a “diagnosed illness without conclusive pathophysiology or etiology, that is characterized by overlapping symptoms and signs and has features such as fatigue, pain, disability out of proportion to physical findings, and inconsistent demonstration of laboratory abnormalities.”

The Court of Appeals for Veterans Claims has said that an illness is a “MUCMI” where either the etiology or pathophysiology of the illness is inconclusive.

By contrast, if both the etiology and the pathophysiology of an illness are partially understood, you not have a “MUCMI.”

So what, then, are the “etiology” and the “pathophysiology” of an illness?

The Veterans Court understood “pathophysiology” to mean “the functional changes that accompany a particular syndrome or disease.” It understood etiology to mean “a science or doctrine of causation or of the determination of causes.” And, in the context of illnesses specifically, “etiology” is defined as “all of the factors that contribute to the occurrence of a disease or abnormal condition.” Stewart v. Wilkie, 30 Vet. App. 383, 388, & n.5 (2018).

In layman’s terms, it might be said that pathophysiology are the manifestations by which a particular syndrome or disease is recognized.

And it might be tempting to say that the etiology of a disease is the cause of that particular disease, but when it comes to forensic medical jargon, “causation” and “etiology” are not interchangeable.

Who, in the end, decides what a MUCMI is?

The decision of what constitutes a MUCMI is case-specific. This is because the combination of symptoms, illness, pathophysiology and etiology are unique to each person. Who then, does the VA rater rely on when making a determination whether a veteran’s particular scenario meets the definition of a MUCMI?

The Federal Circuit told us, in Goodman v. Shulkin, 870 F.3d 1383, 1388 (Fed. Cir. 2017), that VA raters who make MUCMI determinations “based on the claimant’s unique symptoms,” may consider a wide variety of evidence: medical expert opinions as well as “all other facts of record.” That sounds incredibly broad, and it is. In VA claims, this translates to power for the veteran.

Your lay evidence is particularly powerful, and should (no pun intended) lay the foundation for your unique symptomatology. A veteran attempting to establish the existence of a MUCMI might, for example, use lay statements from anyone capable of observing those symptoms as they present in her daily work and living. Those lay statements should include as many folks as she can find who are willing to provide a statement describing the frequency, chronicity and severity of her symptoms. That list might include not only herself, but also her spouse or significant other,  work colleagues, bosses, and friends.

That lay evidence forms the foundation for a medical opinion.

And, in the case of a MUCMI, the purpose of the medical opinion is to establish that it is at least as likely as not that there is not conclusive pathophysiology or etiology for those symptoms.  In other words, the origins and the manifestation of the symptomatology in the veteran is not conclusively known.

#3: What is the difference between a “functional gastrointestinal disorder” and a “structural gastroinestinal disease”?

Remember how gastrointestinal signs or symptoms can be one of the symptoms in a MUCMI?

Well what happens when your gastrointestinal symptoms are characterized by GERD: Gastroesophageal Reflux Disease? Can it still be a MUCMI?

No. At least that is what the law says as of today.

In a recent precedential opinion, the Veterans Court reviewed a BVA decision that found that it did not matter whether GERD was a MUCMI, and irrespective whether it had a “conclusive pathophysiology or etiology,” 38 C.F.R. §3.317 specifically excludes “structural gastrointestinal diseases” from the presumption of service connection due to Gulf War Syndrome.

The Court acknowledged a note in 38 C.F.R. §3.317 stating that functional gastrointestinal disorders are those that are characterized by “chronic or recurrent symptoms that are unexplained by any structural, endoscopic, laboratory, or other objective signs of injury or disease and may be related to any part of the gastrointestinal tract.” 38 C.F.R. § 3.317(a)(2)(i)(B)(3).

The distinction between what constitutes a structural or functional gastrointestinal disease is critical.

A functional gastrointestinal (GI) disease is one in which there is no structural abnormality, but the GI system not functioning well. An x-ray, endoscopy, blood test, or other testing by your doc or a gastroenterologist will probably provide no abnormal results that can be associated with the symptoms.  Examples of functional GI disorders include: heart-burn, chest pain, irritable bowel syndrome (IBS), constipation, diarrhea, , incontinence, and dyspepsia.

However, the law firm bringing the appeal to the Veterans Court did not brief this issue, and it was not explored in any noteworthy detail. In fact, it appears that the veteran’s lawyers, from the law firm of Chisholm, Chisholm and Kilpatrick, conceded that GERD is a structural gastrointestinal disease and therefore expressly excluded from the definition of a MUCMI.

Clearly, I don’t agree. But what’s done is done. Atencio’s holding that GERD cannot be a MUCMI as a matter of law is the law, and it’s going to take a lot of groundwork and time to unravel the holding, if that can be done at all.

The important takeaway is this – when you are looking at the symptoms that you argue to be a MUCMI in a case in which you are seeking the Gulf War Syndrome presumption – your expert should be very clear as to whether or not your gastrointestinal symptoms are functional or structural. And they should explain why that is the case.

This two-part post is just a summary of the Gulf War presumption.

As I mentioned in the first post, Gulf War presumptions are one of the more confused and complicated areas of veterans law. If you are claiming one and are getting denied, then you probably should start considering whether an attorney with experience with Gulf War claims might be able to help.

If you have any questions, share them in the comments below.

I don’t post everybody’s comments, but I do read them to see if the post can be improved based on y’alls questions.