What is Gulf War Syndrome claims (Part 1 of 2) 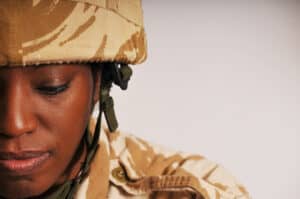 What is Gulf War Syndrome?

Its cause is unknown. It presents in different ways and at different times for many veterans. The disability manifests in several ways: breathing problems, sleeping problems, problems with the digestive system, pain problems, obesity or weight gain, and more.

The VA has created a process for proving a claim for Gulf War Syndrome no less confusing than the disability itself.

Let me stop there.

The VA has made a confusing process to establish a presumption that your disability is Gulf War Syndrome from your military service.

About three years ago, we learned that the VA denies about 80% of claims for Gulf War Syndrome. This is, in my opinion, due to a couple things. First, doctors and the VA are genuinely confused about what the disability actually is. Second, proving Gulf War Syndrome requires an electrical engineering degree to decipher the VA’s regulations.

Keep this in mind though: you don’t HAVE to prove entitlement to the presumption of Gulf War Syndrome in order to service connect the syndrome. A veteran can always claim that her disability, whether a formal diagnosis or a constellation of symptoms, whether Gulf War Syndrome or something else altogether, is directly related to her military service, and establish that claim with a medical nexus opinion to a particular in-service event.

But if you want the VA to presume that your symptoms are Gulf War Syndrome, you’re going to have to jump through a few hoops.

To establish a presumption of service connection for Gulf War Syndrome, you have to show that you have a “qualifying chronic disability” that results from either an “undiagnosed illness” or a MUCMI defined by a cluster of signs or symptoms. 38 C.F.R. §3.317

Let’s make that easy: to qualify for presumptive service connection under the VA’s regulations, an eligible veteran has to show that she has a MUCMI or a Qualifying Chronic Disability.

Let’s break it down even further.

Who is an Eligible Veteran?

There are 3 requirements to establish eligibility for presumptive service connection of Gulf War Syndrome.

1. The first criteria for eligibility involves the time when the veteran’s disability begins to manifest.

Currently, that includes any veteran whose disability manifested anytime between the veteran’s active duty military service and 31 December 2021.

The disability manifests if its symptoms are ratable at 10-percent or higher.

2. The second criteria for eligibility involves the location of the veteran’s service.

In 2016, the Court of Appeals for Veterans Claims considered that question. The veteran in that case looked to executive orders, maps, and other evidence to establish that when Congress said “Southwest Asia theater of operations” it included – in his case – Afghanistan. The VA said, no, Congress gave us the authority to decide which countries are included in the “Southwest Asia theater of operations.”

In 1995, the VA had published the first version of 38 C.F.R. §3.317 in which it defined “Southwest Asia theater of operations” to include “Iraq, Kuwait, Saudi Arabia, the neutral zone between Iraq and Saudi Arabia, Bahrain, Qatar, the United Arab Emirates, Oman, the Gulf of Aden, the Gulf of Oman, the Persian Gulf, the Arabian Sea, the Red Sea, and the airspace above these locations.” 38 C.F.R. §3.317(e)(2).

In some respects, the CAVC’s decision makes sense: the first version of the Gulf War Syndrome statute was passed in 1994, and so Congress would have no reason to have intended service in Afghanistan to qualify for the presumption. And, after 9/11, when Congress did update the Gulf War Syndrome statute, it did not provide any other definition of “Southwest Asia theater of operations.”

In other respects, it doesn’t make sense. The disease is probably less-related to the location of the service as to the timing of the service. Plenty of veterans of Operation Enduring Freedom who served in Afghanistan are experiencing symptomatology that is consistent with Gulf War Syndrome.

The presumption is unavailable.

Once a veteran is eligible for the Gulf War Syndrome presumption, she must next prove that she has a qualifying chronic disability.

In Part two of this topic – a link will appear here when the post is ready – we will talk about how to prove entitlement to the Gulf War Syndrome presumption.