Is the VA Coming For Your Guns? 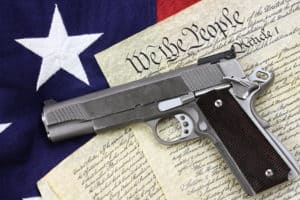 Once upon a time, it was though that the world was flat.

For good reason, too.

If you lack the perspective of seeing the world from above the world and can only see it from the ground, it sure does appear to be flat.

That’s how myths and fallacies work – there’s often a good reason a myth exists, and sometimes it is because there is a kernel of truth in it.

Such is the myth that the Government is coming for your Guns if you have PTSD.

That myth is out there – just the other day, I ran into a Veteran on Facebook discouraging Veterans from seeking PTSD benefits or treatment out of fear that the Veteran might get his guns taken away.

I promise you, it’s a myth.

And when you hear the REAL reason this myth was started, you’ll also see that there is a kernel (a very tiny kernel) of truth in it.

My Background With Lawyers, Vets and Guns.

Sounds like the alternative title of a Warren Zevon song, right?   “….send lawyers, vets and guns…”

All kidding aside, I speak from a position of authority on this topic.    I am an avid hunter – mostly deer, but I’m teaching myself turkey huntin’, too.

And, once upon a time, I was a licensed firearms dealer.

Point is, I’m no stranger to guns, or gun-laws.

I’m also no friend of the VA – while there are good people – some REALLY good people – working for the VA, I’m not going to  blow sunshine up your arse about them.

Leadership at the VA perpetuates an adversarial and antagonistic relationship with the Veterans community, and messes with a lot of lives (sometimes permanently) with their BS bureaucrat game-playing.

Lastly, I have been working with Veterans for over 10 years –  thousands of Veterans.  In all those years, I have never once seen the VA take someone’s guns.

I have seen Veterans who are competitive pistol shooters AND who have a PTSD diagnosis.

I have known Veterans who have been rated 100% disabled due to a mental health condition who still own their firearms, and still go hunting whenever they can.

I say this with 100% sincerity:  The VA is not coming for your guns if you get benefits or treatment for PTSD.

Until it sinks in.

Where, then, does this myth come from?

Let me tell you…

Why Veterans Think the VA Is Coming for your Guns.

The VA has a program called the Fraudiciary Program.

Okay, it’s really called the VA Fiduciary program, but it’s so rife with fraud and theft and criminal behavior that “VA Frauduciary Program” is a much more descriptive title.

When the VA decides – often wrongly – that a Veteran is incompetent to manage their own finances, they often place the Veteran in the Frauduciary program.

If the Veteran is lucky, they will have their money managed by a “Fiduciary” that ignores their requests and doesn’t communicate with them.  Many Veterans, however, are appointed a Frauduciary who is in jail, stealing enough money to later get thrown in jail, or worse.

But something else happens when the VA proposes to find the Veteran incompetent to manage their own money.

It is this paragraph in the VA letter from which the myth that the VA is coming for your guns is derived:

“A determination of incompetency will prohibit you from purchasing, possessing, receiving, or transporting a firearm or ammunition. If you knowingly violate any of these prohibitions, you may be fined, imprisoned, or both pursuant to the Brady Handgun Violence Prevention Act, Pub.L.No. 103-159, as implemented at 18, United States code 924(a)(2).”

Can the VA Prevent You From Purchasing a Firearm?

Not for these reasons, or any of which I am aware.

At least not legally.

The paragraph cited above is a perfect example of how bad legal advice causes a lot of problems.

Somewhere, at sometime, an attorney in the VA Office of General Counsel (a group not exactly known for the legal acumen) decided that there was a connection between “financial incompetency” for the purposes of guardianship and having a “mental defect” for purposes of the Brady Handgun Violence Prevention Act.

Being that bad lawyers are often supervised by bad lawyers (or else they would become good lawyers), this horse-crap legal analysis floated to the top of the VA.

And, as a result, every time the VA sends out a letter proposing to find a Veteran financially incompetency, they also get lied to about the implications of that proposal insofar as 2nd Amendment rights.

And tacky and base politicians, who know that the best way to get a “bear” out of hibernation and out to the voting booths is to poke them, translate this into “The VA is Coming for Your Guns.”

The whole thing would be kinda funny but for the following consequences:

What is the Actual Law When it Comes to Guns, Veterans and Financial Incompetence?

The VA appoints Frauduciaries when a Veteran is found to be incompetent to manage their finances.

That phrase is hugely important – the VA’s incompetency determination is limited ONLY to an ability to manage ones own finances, and speaks to no other type of competency.

In fact, it is not entirely uncommon to find Veterans who are incompetent to manage their own finances…but who are completely competent for all other purposes.

The Brady Bill, on the other hand, forbids an individual from owning or buying a firearm after an adjudication of a mental defect, as that term is defined under 18 U.S.C. § 922(g)(4).

A “mental defect” for the purposes of the Brady Bill is totally different from financial incompetence.

So, when the VA tells Veterans that, if adjudicated financially incompetent under the VA Frauduciary Program, they will be prohibited from buying or owning firearms, the VA is violating the Constitution in about 457 ways.

Ironically, the NRA, who has pockets deep enough to put an end to the VA Frauduciary Program, has never once lifted a finger to defend a Veteran in this position.  Why?  I’ll let you answer the question yourself, but it has a lot to do with paying “lip service” to Veterans.

Here are just a few of the Constitutional Violations:

Bottom Line when it Comes to the VA and a Veteran’s Guns.