The VA Fiduciary Program: A Wretched Hive of Scum and Villainry. 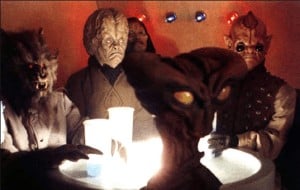 I would like to talk about the VA Fiduciary Program.

I often refer to this program as the “Fraud-uciary” program because of the problems associated with it.

It’s time to start clamoring for change about this process, and this is a very small step in that direction.

Why?  I think Obi Wan Kenobi Sums up the VA Fiduciary Program better than anyone:

What is the VA’s Fiduciary Program all about?

Here’s how it works, generally.

The VA decides that a Veteran is not mentally capable of managing their own finances.

In many of the cases I reviewed, there was no medical or clinical evaluation to support this decision. In those cases where there was a medical or clinical evaluation to support “incompetence”, the VA did nothing to appoint a “guardian of the person” – leaving disabled Veterans with 5 or 6 figure fiduciary accounts to wander the streets, miss doctor appointments, have no access to necessary prescription medications – and in some cases, without food, clothing or shelter.   Here’s a story about one of those Veterans that the VA abandoned.

After making that decision, the VA appoints a “fiduciary” to manage the finances of that Veteran.  The VA will reach into the bank accounts of the Veteran, taking control of the Veteran’s savings and giving it to the “Fiduciary”.

In one case we are looking at, the VA (unlawfully) took the Social Security payments of a Veteran’s wife and gave those to the Fiduciary as well.

The fiduciary is allowed to take up to 4% of the Veteran’s savings and monthly benefits as a ‘fee’ for managing the Veterans finances.

Why is this a problem?

To answer this, let me point out some of the abuses of the VA Fiduciary Program – I assure you, they are the norm and not the exception.

I have yet to find a fiduciary (other than Veteran Family members and State Court Appointed guardians) that  properly managed a Veteran’s money.

1) Joe Phillips, a Houston attorney, and his wife.  This “fiduciary” is currently pending a federal criminal trial in Houston for allegedly scheming (with his wife) to steal over $2 million from the bank accounts of the Veterans whose finances they were to manage.   This scheme is alleged to have started in 2003 – meaning it took the VA and the Dept. of Justice over 8 years to audit the fiduciary, identify the alleged fraud, and charge these individuals for their alleged malfeasance.  Read the story here on the Department of Justice website. (As of 2014, I believe these 2 individuals are serving time in Federal Prison – but that may not stop the VA from re-appointing them…see Example #5, below)

2)  Read about this Central Texas Veteran whose family had to pawn their possessions because the VA’s appointed “fiduciary” appears to refuse to communicate with the Veteran and refuses to provide the money the Veteran needs to take care of himself: Veteran’s Family Asking About Their Money.

3) Read about this Florida Veteran whose fiduciaries are taking a percentage of all of his money – not just his VA benefits.  Vets lose benefits as VA covers up mistake.

4) Read about this Tennessee Veteran whose fiduciary allegedly embezzled over $100,000 in money from the Veteran and the Veteran’s estate:  Surviving Family members fight for Memphis Veteran’s Benefits.

6) Updated from 2014: Read the VA OIG report on the Eastern Fiduciary Hub. It’s like Mos Eisley out there – a wretched hive of scum and villainry

I could go on with more – and worse – examples.

It is my opinion that the VA Fiduciary Program needs to be gutted completely.

There is a process under every state’s guardianship  law for every Veteran.

This process involves the Veterans’ family, is managed and audited by the state court, and ensures that the Veteran’s physical, medical and other needs are being met (something that the VA’s Fraud-uciary program falls woefully short on).

Here is what should happen to effectuate change in the VA:

1) States should pass laws regulating the conduct of individuals who serve as fiduciaries of that state’s veterans.

These laws should include the appointment of special prosecutors at the state and county level to investigate and prosecute fraud, embezzlement, theft, etc., of Veteran’s money and property.   The Veterans Law Blog will draft Model Legislation for your State to use: contact Chris Attig (Support@VeteransLawBlog.org)  if you are a State Legislator who is interested in proposing legislation to protect your state’s Veterans from the VA Fraud-uciary Program.

2) Veterans should challenge the VA’s appointment of any fiduciary that they do not know – immediately!

In a 2011 Decision issued by the Court of Appeals for Veterans Claims (Freeman v. Shinseki), the court found Veterans should have an opportunity to file an appeal of the VA’s appointment of a fiduciary.

(This is going to be hard because in many cases the VA doesn’t tell the Veteran that they appointed a fiduciary and emptied the bank accounts of the Veteran until months later).

How does the Veteran challenge the decision?

File a Notice of Disagreement with the VA Regional Office just as you would for your disability compensation appeals.

3) Veterans should contact attorneys in their geographical area to ask for help ensuring that the Fiduciary has complied with their own State laws involving the VA Fiduciary’s Duties to the Veteran.

In many cases, state law provides avenues to take the Fiduciary to State Court and sue in civil court for damages if the VA Fiduciary is mismanaging a Veteran’s money or has breached a VA fiduciary duty to the Veteran.

(This is one reason it is hard for Veterans attorneys to really fix this system – so many of the issues depend on state law, and so few attorneys that represent Veterans have familiarity or working knowledge of State Guardianship laws.  This is one of the drawbacks of the VA not allowing Veterans to retain attorneys prior to an adverse decision.)

4) If you feel that your fiduciary is stealing money from a Veteran – contact your City and County District Attorney’s Office.

If that doesn’t work, contact your States’ Attorney General’s Office.

Keep reaching out to these folks until someone answers and helps investigates whether your VA Fiduciary has committed a criminal act or act(s).

5) Everyone should contact their Federal legislators and ask them to hold hearings into the abuses visited on Veterans by these “fiduciaries”.

Only through these hearings will the legislative needs of our Veterans become clear.

It’s time to scrap the Fiduciary program – Veterans don’t need any more Paternalistic & Government Sponsored Fraud than they already have to deal with.