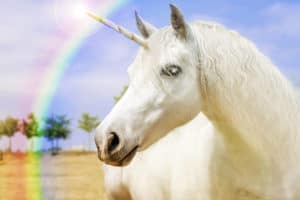 In today’s post, I want to tell you about the VA’s “Pink Unicorn”.

Generation after Generation of VA Rater has perpetuated the myth of the Pink Unicorn.

What is this Pink Unicorn?

It is the VA’s belief that the Veterans Claim or Appeal always dies with the Veteran.

“The Veteran’s claim dies with the Veteran” is one of those Myths that is repeated so often that at some point it often becomes the truth for many folks.

Unfortunately, this Myth is not the law – at least not the entire law.

As with most Myths, there is a morsel of truth in the statement.

So how can a surviving spouse or surviving child continue the Veteran’s claim after they die?

Here are a couple ways that a Veteran’s Disability Compensation Claim survives the death of the Veteran (there are others, but these are the major ways).

In a nutshell, when a Veteran dies, the “value” of his or her pending claims are considered “accrued benefits”.

Here are a couple of points about the Accrued Benefits Claim:

a. The application for accrued benefits must be filed within one (1) year of the death of the Veteran.

The Right to Substitution.

If the Veteran dies on/after October 10, 2008, an “eligible person” may substitute as the Veteran for purpose of processing the Veteran’s “pending claim” to completion.

As with any statute, interpretations of certain words and phrases are vital.

An “eligible person” is defined, in the Veterans Benefits Improvement Act of 2008, as “a living person who would be eligible to receive accrued benefits due to the Veteran under 38 U.S.C. § 5121(a).

The “eligible person” has one (1) year from the death of the Veteran to file a Motion for Substitution.

When and where and how an “eligible person” may substitute for the Veteran is rather complicated and tricky, and beyond the scope of this informational blog post.

You can read more about the Substitution rules and regulations by clicking here – but know this….the VA has screwed up every single substitution request that I have seen in the last 2 years.

Maybe they will tell you that the Veteran has to sign the substitution request (think that through…how does a deceased Veteran sign a survivor’s claim).  That heaping pile of BS comes courtesy of the Albuquerque DRO.

Heard it with my own 2 ears.  From a DRO at the Albuquerque Regional Office.

Or maybe they will tell you that the Survivor’s Accrued Benefits claim was denied, so they don’t have to consider substitution.  Thanks for that one, Newark RO.

Or the BVA – they denied one Substitution claim with some really circular logic:  the surviving spouse of a Colonel exposed to Agent Orange in Vietnam had no claim for accrued benefits because the BVA (in the same decision) dismissed her Request for Substitution –  over which it had no jurisdiction because the VA Regional Office had never considered and decided it.

My favorites are where they say that there is no law that allows the survivor to substitute into a claim where the one year appeal period has expired.  New Orleans. Los Angeles, Houston, Muskogee…great arguments except that they are the EXACT opposite of what the law says.

Point is this – if you are denied survivor benefits in a Substitution claim, you should consider contacting a VA Accredited Attorney….make sure that the attorney has handled, and knows how to handle, survivor benefit claims and appeals.

There may be other ways….

I’m not a big fan of CUE Claims.

Far too many Veterans and Survivors assert them at the wrong time and in the wrong way, and hurt their claims and appeals far more than they help them.

You can read more about the CUE Claim here.

But in some very, very limited situations, a CUE claim might be an effective way to secure survivor benefits for a surviving spouse…..you’re going to want to bring in an attorney that knows how to argue CUE for that kind of claim though.