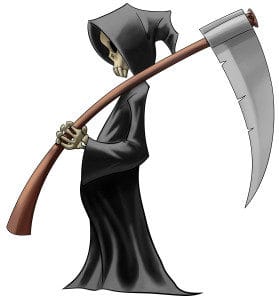 I comb through Veterans message boards, email listservs, and Facebook groups every week.  One message that I see – a LOT – is the general fear of being remanded by the BVA or the Veterans Court.

For many Veterans – the mental image they have of a VA Remand is the picture that appears at the top of this post.

My thoughts are that the VA Remand is one of the most powerful things that can happen to a case.

Yes, a favorable decision from the BVA is nice – but if you are at the BVA, then the chances of getting a grant are increasingly small.  In 2015, the Board received 52,509 appeals – in only 17,279 of them did it award benefits or a favorable decision to the Veteran.  However, in 25,881 cases, the Board sent the case back to the Regional Office on a Remand.

That’s about 49% – half of you that appeal to the BVA get sent BACK to the Regional Office for development of more evidence or to fix errors in a decision.

And I think that, for the majority of us, that is GOOD thing.

If you have gotten to the BVA or the Veterans Court, then there is something missing from your case.

It could be that you are lacking 5 Star Evidence.

It could be that the VA is deciding your claim based on someone else’s C-File or medical records.

Maybe the VA just isn’t applying the facts or the law properly.

Regardless WHY you haven’t gotten a favorable decision, the simple fact remains: you have SOMETHING missing in your claim.

You will need a VA Remand to fix that.

I Cover HOW to go About Doing this in one of the Field Manulas….

In 2014, I published an Veterans Caselaw Field Manual:  “10 Veterans Court Cases that every Veteran Should Know”.

Instead of reciting boring facts and law from the case – this Field Manual gives you PRACTICAL guidance in using a particular Court case to improve your VA Claim.

“Don’t fear the VA Remand”. That’s the lesson of this case.

But, many Veterans do fear the remand. They fear that it is a black hole into which their case might disappear for months, and years.

And in some cases it will – hopefully, when I show you some practical steps to take to use Stegall in your claim, your case will not disappear into the Remand Black Hole.

The true power of the remand, when it comes from the Veterans Court – is that it re-opens the record, allowing the Veteran to put in new evidence and argument on any issue in the claim or appeal.

This can be invaluable.

My experience has been that the biggest reasons Veterans lose before the Board (BVA) is an evidentiary problem: either the Veteran didn’t have enough 5-Star Evidence in his/her claim or appeal, or the BVA didn’t properly analyze that evidence and provide an “adequate reasons and bases” for its denial.

Getting a remand from the Veterans Court – back to the BVA – allows a Veteran the chance to fix both of these problems.

So let’s take a look at what Stegall gives us, and why we should not “Fear the VA Remand”.

Facts and Holding of the Case.

The Veteran in this case was rated at 10% for headaches, and he sought a higher rating.

The BVA denied the request, and the Veterans Court disagreed. The Veterans Court thought that the C&P exam was insufficient, and sent it back to the BVA with instructions to have the BVA conduct both a neurology and psychiatric exam.

While the case was on Remand, but before the BVA could order the exams, the Veteran was hospitalized for PTSD – for about 3 months.

At discharge, his medical records made comments to the effect that he still had headaches, but that they were probably due to anxiety.

The RO grabbed hold of those statements, denied the claim for increased rating for headaches, largely based on the discharge notes. The key point is that the RO never conducted the exams that the Remand Order had required.

The BVA gave the Ratings Decision its seal of approval, and the Veteran appealed to the Veterans Court.

The Veterans Court remanded the case – again – with some pretty strong language. Turns out the Secretary’s attorneys tried to argue that the BVA and the VBA were separate in the “vertical chain of command”. (The VA’s attorneys have a proclivity to the inane in their arguments – read this case about how the VA Office of General Counsel lost $21,000 of taxpayer money fighting over a sentence)

This is part of the obfuscation tactic of the VA – they hide their bureaucratic incompetence behind one of the major branches – the VHA or the VBA (and sometimes pretend that the BVA is not under the VA), and then all 3 sit like those little monkeys: “See No Evil, Hear No Evil, Speak No Evil”.

The Court said this, among other things:

And it makes sense, too.

An order of a Court needs to be followed. The case law is replete with examples of the VA and BVA not doing what the Court orders – and then playing coy about it.

The problem is, however, that the BVA and the VA have set up another level of bureaucracy that makes it APPEAR that they are complying with the Veterans Court’s Orders on Remand, while in reality they are just delaying the case even longer.

So, when the BVA or the CAVC remands your case back down for more development of the record or analysis, Veterans need some steps that they can follow to ensure that their case doesn’t wander into the Black Hole of the VA Remand.

How to Use this Case in your VA Claim:

As stated above, the Veteran should not Fear the Remand.

Here is one approach that my Firm uses to follow up on the Remand Order, and ensure that our Remanded cases don’t get pulled into the Remand Black Hole…..

You can read the rest of the Field Manual by purchasing a copy here.