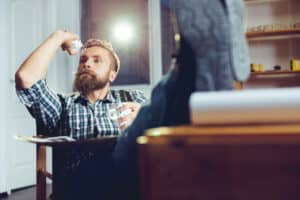 In doing so, the Federal Circuit explained how these three supplemental claim regulations cut against the very purpose and goals of the AMA appeals process Congress wanted implemented.

You can read the Federal Circuit’s full 63-page opinion by clicking here.

This post will be a quick summary of the invalidated regulations and generally what it means for your VA claims and appeals under the AMA. We will be discussing this case for a long time, though.

A Quick Overview of the AMA appeals process.

It took years of negotiations with the VA, Veterans Service Organizations (VSOs), veterans advocacy organizations like the National Organization of Veterans Advocates (NOVA) and the National Veterans Legal Services Project (NVLSP), but what ultimately emerged is an appeals process that offers several options to challenge a bad VA Rating Decision.

We call that new appeals process the Appeals Modernization Act, or “AMA” for short.

The foundation of the AMA process is the “claim,” of which there are many types: original, initial, supplemental, and (sort of) CUE claims.

What is a VA Regulation?

Once the AMA was passed into law by Congress and signed by the President, the VA began to prepare regulations to implement the new system. Those regulations are supposed to fill gaps in the statutory process left by Congress, or to lay out more specific processes and rules to carry out Congress’s intent.

You can tell the difference between the statute and the regulation by how lawyers and judges cite to them.

Citations to 38 U.S.C. are citations to statutes, specifically, Title 38 of the United States Code.

Citations to 38 C.F.R. are citations to VA regulations, specifically, Title 38 of the Code of Federal Regulations.

When a veteran, or an affected organization, feels that a VA regulation is unlawful, or somehow improper, they can challenge the new regulations to the US Court of Appeals for the Federal Circuit under the process laid out in 38 U.S.C. §502. This type of challenge is unique – because it challenges the validity of the regulation as it applies to all people affected by it. It is different from a challenge to the interpretation of a VA regulation in a particular veteran’s claim or appeal.

The case we are talking about today addressed who has legal “standing” to bring these sorts of “reg challenges.” Read the decision by clicking here.

In any event, the case we are looking at today is the result of a rule challenge under §502.

In the interest of full disclosure, I have served on the Board of Directors of NOVA https://www.vetadvocates.org/cpages/board-and-staffsince 2015. And as the co-chair of NOVA’s Amicus and Litigation committee, I was one of a handful of folks from NOVA who worked with the lawyers representing NOVA in the rule challenge.

While the consolidated lawsuits of the MVA, PVA, NOVA, NVLSP, Carpenter Chartered and the individual veteran challenged a number of AMA regulations, the Federal Circuit’s decision focused on three supplemental claim regulations that it found cut against the letter and spirit of the AMA.

We will look briefly at each of the three supplemental claim regulations that the Circuit invalidated.

1) Veterans and survivors can file an “intent to file” in conjunction with a supplemental claim.

Under AMA, the VA interpreted one of the more important supplemental claim regulations –  38 C.F.R. §3.155 – is such a way that veterans could only file “intent to file” forms for original or initial claims.

The Federal Circuit found the VA’s attempt to exclude “supplemental claims from the intent-to-file framework is arbitrary and capricious,” particularly in light of the fact that the Secretary appeared to offer no defense of its regulation and no reasoning that supported the regulation.

2) Veterans and Survivors can file a Supplemental Claim WHILE appealing to the Veterans Court or Federal Circuit.

The second of the supplemental claim regulations invalidated by the Federal Circuit was 38 C.F.R. §3.2500(b), but only to the extent that it prohibited the filing of a supplemental claim when adjudication of the same claim is pending before a federal court.

The language of this supplemental claim regulation that was invalidated is in red, below. The rest of the regulation is still valid and good law.

(b) Concurrent election prohibited. With regard to the adjudication of a claim or an issue as defined in § 3.151(c), a claimant who has filed for review under one of the options available under paragraph (a) of this section may not, while that review is pending final adjudication, file for review under a different available option. While the adjudication of a specific benefit is pending on appeal before a federal court, a claimant may not file for administrative review of the claim under any of options listed in paragraph (a) of this section.” 38 C.F.R. §3.2500(b)

The VA’s attempt to use judicial review to create another hurdle to overcome when filing a supplemental claim contradicted Congressional intent to extend “broad availability of supplemental claims” to improve VA efficiency. And the VA’s regulation hindered veterans’ ability to get the earliest effective date possible by continuously pursuing their AMA claims and appeals.

Bottom line – if you appeal a bad BVA decision to the Court of Appeals for Veterans Claims (aka, the CAVC), you can still file a Supplemental Claim within one year of that decision (so long as the VA Rating decision being appealed was issued on/after February 19, 2019).

This is a significant decision which I think will continue to be referred to by both Courts – and I believe it is the cornerstone that will help to reshape the roles of the VA, the BVA, and both courts in adjudicating veterans claims and appeals.

The third of the supplemental claim regulations invalidated by the Circuit Court was 38 C.F.R. §14.636(c)(1)(i), but only to the extent that it limited when a veteran’s accredited representative may charge fees for work on supplemental claims.

It is important to understand what the Federal Circuit did NOT change:

The only thing that changed is that veterans seeking to file supplemental claims more than one year after a bad VA rating decision are entitled to hire an attorney to help. And because attorneys can get paid for this work, more veterans can get legal representation earlier in the supplemental claim process.

Given that attorneys have the highest win-rates of all types of legal/accredited representatives, this could well be a game-changer for many veterans who were denied benefits more than a year ago but still feel like the VA got it wrong.

So there are the three AMA supplemental claim regulations the Federal Circuit invalidated.

Let me know your questions in the comments, below.