Another Tool: The Writ of Mandamus in VA Claims. 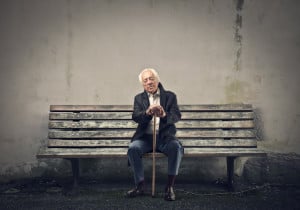 The VA takes forever to act.  Nothing new there.

(The man on the bench in the image above?  He was 25 years old when the BVA Remanded his claim…they still haven’t taken action).

But there really isn’t anyone who can help with this.  In fact, when it comes to third-party accountability, you’d probably be better off studying alchemy.

Congress – as I’ve often said here – is like nipples on a man. Sure, we’d look weird without them, but they are virtually useless in recent years.

What about the Courts, though? What role do they play in holding the VA Accountable?

Frankly, the Court does a better job than anyone of holding at least the BVA accountable – and while I wish they did MORE – I understand that the CAVC is a young court in the grand scheme of things, and that if you are looking for massive overnight change in the law, you are unlikely to find it in the Courts.

In reality, the ONLY relief is to be more proactive in our VA Claims and Appeals, and file claims/appeals that the VA wants to adjudicate.   Follow my 8 Steps to Improve Your VA Claim and I will teach you how to become more proactive – and more powerful.

However, if you are into taking a “shot in the dark”, consider the possibility of filing a Writ of Mandamus with the Court of Appeals for Veterans Claims.

Trivia Question: Do you know when a Veteran filed the First Petition for Writ of Mandamus?  Answer: 1792.  A United States Appeals Court – signaling a trend that would continue  to the present day – denied this Revolutionary War Veteran’s Writ challenging the Government’s slow handling of Veteran Pensions.

Keep in mind that like taking an actual “shot in the dark” with an actual rifle, filing a Writ of Mandamus is not something to be taken lightly.

I doubt that the CAVC will sanction the average Veteran filing a Writ, but it is a step you want to be very, very careful before taking.

In fact, in late 2014, the CAVC did sanction a Veteran for, as I recall, frivolous filings at the Court.  More on that later.

What is a Writ of Mandamus?

They do this by filing what is called a Petition for a Writ of Mandamus.

The Writ is a relic of the legal process that existed when judges wore wigs and armies wore chain mail and rode horses. Orders of what were then known as a “court” were called “Writs”.

The word “Mandamus” comes from the Latin and has come to mean, “We Order”.

So, the Writ of Mandamus is an Order from a Court directing an Executive Branch Official to take a certain required action.

The Court of Appeals for Veterans Claims has the authority to issue a Writ of Mandamus pursuant to a statute called the All Writs Act.

To seek that relief, you have to file what is called the “Petition For a Writ of Mandamus”.

You can start your research on preparing a petition for a Writ of Mandamus in Rule #21 of the Local Rules of the Court of Appeals for Veterans Claims.

What must a Veteran show to get a Writ of Mandamus Issued?

The Court has  issued the Writ less than a handful of times in its young history. However, here are the legal elements of a Writ of Mandamus.

I’d love to tell you the “how” of this type of filing, but because the Court has only issued the Writ a handful of times in its history, I don’t know that anyone can tell you how to succeed with a Petition for a Writ of Mandamus.

(1) The petitioner must lack adequate alternative means to attain the desired relief, thus ensuring that the writ is not used as a substitute for the appeals process,

(2) The petitioner must demonstrate a clear and indisputable right to the writ, and

(3) The Court must be convinced, given the circumstances, that the issuance of the writ is warranted.

If you are alleging “delay” is the basis for your Petition for a Writ of Mandamus, then you have an “extra” element:

(4) The petitioner must demonstrate that the alleged delay is so extraordinary, given the demands on and the resources of the Secretary of the VA, that it is equivalent to an arbitrary refusal to act.

What does all that mean – in English:

1) You have to have tried every which way but Sunday to get the desired relief, but the VA is not responding at all.

2) There has to be a legal duty for the VA to act – spelled out exactly the way you are asking for it. (In other words, you won’t get a Writ issued ordering the VA to respond to your latest letter).

3) The Judge considering your Petition has to be convinced you need a Writ.  I wish I could tell you what that meant, but there are so few writs issued by the Veterans Court that nobody can really say how you convince a Judge you need the Writ.

4) If you are alleging “VA delay” as the basis of your Petition for a Writ of Mandamus, you have a hard row to hoe.   The Court is likely to find that the VA is so overwhelmed with demands from Veterans that even another $152.7 BILLION DOLLARS from the Taxpayers won’t help it meet those demands.

That does not mean, however, that you won’t get the relief you seek. Sometimes, to show that it is not “refusing to act”, the VA has to provide the document that you are seeking to have the Court Order they produce.

Here are some things to keep in mind when it comes to a Writ of Mandamus.

Point #1: You can tell that I’m not real “keen” on the Writ of Mandamus. That’s partially true. It’s another arrow in the quiver, and I have and will use it as appropriate. Just be careful before you string this arrow, as it is one that can come back to strike you.

Point #2: The Writ of Mandamus is a drastic remedy “to be invoked only in extraordinary situations.” Think of the millions of Veterans that the VA has screwed over in the past 60 years. Now, think of the small handful that have succeeded in getting a Writ of Mandamus issued. Unless your situation is TRULY one in a million, it may never get granted. I’m not saying this is how it SHOULD be…I’m just saying this is how it IS.

Point #3: The All Writs Act only allows a Court to issue a Writ of Mandamus in furtherance of the Court’s jurisdiction. This means a lot more than I can cover in a single post, but here’s one thing that can be said: If the CAVC doesn’t have the authority to do the thing you are asking them to order the VA to do, then they are NOT going to issue a Writ of Mandamus to the VA.

Point #4: Even when the Writ of Mandamus is granted, the result is that the VA is ordered to take the next action in the appeal process – never ordered to do something substantive. The CAVC will order the VA to issue a SOC, for example, but will never issue a Writ of Mandamus ordering Service-Connection. They just can’t insert themselves into the process like that – if the issue before the Court is a Writ, it will decide that issue, and none other.

Point #5: The Court doesn’t seem to look favorably on Writs, although maybe the right facts haven’t percolated up the appeals process, yet. Please thoroughly research the law before filing a Petition for a Writ of Mandamus – the last thing you want is a court decision dismissing your Writ because you failed to follow the rules.  Instead of getting action from the VA, you will empower them to do a lot more of nothing.

Point #6: The easiest way to lose a Petition for a Writ  of Mandamus is to convince the Court that you are using the Petition as a substitute for the actual appeal process. The key to a Writ – whatever it is – probably involves getting the next action in the VA Claims Process from the VA.

Point #7: The Court will not intervene by issuing a Writ  of Mandamus unless you prove all of the above elements – even though severe hardship may result from continued VA delay

Point #8: A Writ of Mandamus will not ordinarily be granted when an alternative remedy is available, and it is never granted when the official to whom it would be directed has the legal discretion either to perform the act demanded or to abstain from doing so.

Point #9: Even when a Veteran can show all the elements that should entitle them to issuance of a Writ, all the VA has to do is respond and it can moot the appeal.

The Writ Process at the CAVC is, in my eye, more evidence of the hallmark of the VA system – there is no accountability.

At the Attig Law Firm, the lack of accountability inside the VA is not something we spend a lot of time on.

It’s a distraction from the real problem – getting Veterans OUT of the VA Hamster Wheel, winning their claims and appeals, and getting them a chance to move on.  If I can paraphrase a line from the movie “Wargames”:

“The Only Way to Win the VA Claims and Appeal game is to get out of it as soon as possible.”

My law firm is not trying to change the VA Claims Process.   Every generation of Americans invents a new Hamster Wheel for its Vets to run through – we’re simply are not in the business of inventing “Better Red-Tape.”

But my law firm – and the Veterans Law Blog – ARE in the business of Changing the Way Veterans Experience the VA Claims Process …. by giving you – the Veteran – More Information, and More Power, in More Ways.

We don’t need accountability to fulfill that Vision – we simply need to take back the Power we already have.