How the VA uses the Presumption of Soundness to Put Your VA Claim On the Road to Nowhere. 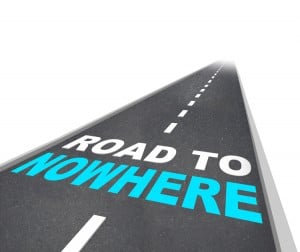 The VA will sometimes deny your claim because they did not give you the presumptions mandated by the law.

I will tell you how they’ll do it…..but if you need to, check out this post to learn what a “presumption” is in the law.

The VA Ignores the Fact that a Medical Condition was not “Noted” on Your Enlistment Physical.

All Veterans, both enlisted and officers, go through the Military Entrance Processing Station (MEPS) to make sure we are fit for service.

Military recruiters send several hundred recruits through MEPS. The recruit is at the MEPS  all day (if not multiple days) going through the medical process — usually including being examined by the world’s oldest doctors!

Two categories of medical information is recorded on your enlistment physical: Medical history and the actual Medical Examination.

Medical “history” is provided by the recruit.

The recruit fills out multiple pages of documents checking boxes and making notes about any medical conditions – diagnosed or not.  The recruit is constantly reminded  by MEPS personnel that they had better tell the truth.

If the MEPS doctor has additional questions about the recruit’s medical history, he will usually ask the recruit to explain and make notes based on the recruit’s information.

The second category – the Medical “Examination” – is conducted by the MEPS staff.

Sometimes, the MEPS will send the recruit for an external consult if there is a question about a condition. Either way, the examination results are “NOTED” by the MEPS doctor.

Did you catch the difference?

The doctor makes notes about the recruit’s history.

The doctor “NOTES” results of the assorted physical examinations conducted at the MEPS. Two distinct notes with legal differences. The examination notes are the condition(s) that are “noted” officially.

Take a look at your entrance physical – is there any notation that there was an exam by a doctor?  If not, and the only reference to medical issues are on the form you filled out (that lists all those diseases and illnesses), then no condition was NOTED on your entry to military service.

Again, the “noted” condition must be the result of the MEPS doctor’s personal examination — not based on his notes from your regurgitation of your medical history.

The VA must find clear and unmistakeable evidence that the very condition did indeed exist prior to service. To me, that should leave no doubt.

But it gets better…

If the VA claims that your condition existed prior to service, there are actually TWO hurdles that the VA must overcome.

Not only does the VA have to rebut the presumption of sound condition with “clear and unmistakable evidence” that demonstrates that the condition existed prior to service, but the VA also has to demonstrate that your condition was not aggravated by your military service as well.

The VA can’t just jump one hurdle or the other.

The VA MUST rebut BOTH elements of the presumption.

Lets say the VA proves with clear and unmistakeable evidence that your condition existed prior to your military service.

They might be able to do this through medical records from your childhood or because your MEPS physical actually detected that very same condition at enlistment. Well, the VA still has more work to do before they can deny your claim.

This burden – clear and unmistakeable evidence – means that an objective person looking at the facts would have to be left with the impression that no reasonable person would have found that military service aggravated a pre-existing condition.

Here’s how the Presumption of Soundness Works in a Real Situation.

I used to have a client right now that was denied service-connection for “Bipolar disorder.”

To do this, the VA points to a pre-service diagnosis for “Explosive disorder.”

Our argument is that they did not prove “Bipolar Condition” existed prior to service so the VA did not clear the first hurdle. But lets say the BVA screws up the analysis and agrees that “Bipolar disorder” and “Explosive disorder” are the same mental condition (a proof that would not happen, because they are distinct and separate mental health conditions).

We would, in that hypothetical situation, say: “Okay VA – you proved his mental condition existed prior to service – but –  you failed to prove with clear and unmistakeable evidence that his military service did not aggravate his mental condition (whether it was Bipolar Disorder or Explosive Disorder).

Don’t Let the VA Win By Going Around the Hurdles.

It’s easy to win a Hurdles Race if you don’t go over the hurdles.  It’s called cheating.

Don’t let the VA cheat you in your claim. Start by learning my 8 Steps to Improve your VA Disability Claim.

Then, Get your VA C-File and take a fresh look at your claim.

Is the condition your claiming service connection also on your MEPS medical documentation?

If not, make the VA rebut  BOTH elements of the Presumption of Soundness.