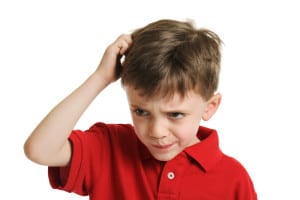 This decision has left me scratching my head……I’m at a loss to explain.

See if you can help me figure it out.

These facts come from a March 2013 BVA Decision. Here’s the timeline:

1981: Female Veteran is sexually assaulted and raped in the military.  Rapist burns her hand during the assault, and threatens her with death if she reports the rape.  In this case, the Veteran became pregnant (apparently as a result of rape, although the statement of facts is not clear on this point) and suffers a miscarriage.

1981: Military Service Medical Treatment Records confirm treatment for a burned hand in June 1981 AND a “Dilation and Curettage” procedure in 1981 (A “D&C” is a medical procedure to remove fetal tissue from the uterus after a miscarriage).

August 2004: VA Psychiatrist and Nurse both evaluate and treat Veteran for PTSD and Chronic Depression secondary to a rape in service.  Treatment continued through May 2007.

2004 – 2005: Veteran files claim for mental health conditions resulting from the rape in service.  Veteran asserted that after discharge from service, she experienced numerous psychiatric episodes and suicide attempts, was hospitalized several times, and accepted abuse and rape as a way of life, “staying drunk until 1996 to cover the feelings of terror and shame.” She testified at her hearing that she has never been able to be in a relationship without being drunk and she has not been in a relationship since she quit drinking in 1996. She testified that she was first hospitalized for mental health in 1985, was beaten by her husband, and in 1998 she attempted suicide and was hospitalized for six weeks.

September 2008: Unchallenged and credible lay statement of a friend who had known Veteran for 33 years corroborates multiple rape “markers”.

May 2010: Joint Services Records Research Center (JSRRC) verifies that the Veteran’s PTSD “…stressor should be  conceded because the records verify that the Veteran was assaulted in a sexual nature while stationed at Kadena Air Force Base.”   The JSRRC also verified that the Veteran received mental health treatment for that assault.

Despite all of the above, the  Seattle VA Regional Office issued a Ratings Decision DENYING service-connection for PTSD resulting from the Veteran’s rape in the military.

Why?  We’ll never know.  The BVA Decision doesn’t address the reasons for the RO’s denial and the Seattle VARO isn’t saying anything.

I can think of only one reason why, given all of the above, the Seattle VARO would not grant service-connection.

The Culture of Denial of Rape and Military Sexual Trauma

The culture of denial  permeates the VA (and the military): this culture turns a blind eye to the reality that rape can and does actually happen in our military. In fact, there were 26,000 rapes and sexual assaults committed by military service-members in 2012 alone. Here’s how that breaks down:

*  71 rapes and sexual assaults each day.

* 3 rapes or sexual assaults every hour.

Veterans who were raped in the military – men and women alike – face an uphill road for service-connection of the medical conditions (physical and mental) that result from their rape in the military.

Their credibility is routinely attacked.  They are blamed for “instigating” a rape.  They are required to provide a mountain of evidence not required of other veterans. It’s shameful – really it is.

I would love to hear the Seattle VA Rater’s explanation – feel free to shoot me an email if you are the rater that denied benefits on this claim and have the courage to talk about your decision.

Why do YOU think the rater denied this Veteran’s Claim?