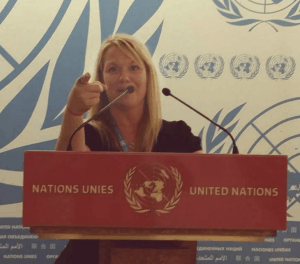 This post was initially published on the Veterans Law Blog on January 17, 2014.

It was  written by a United States Marine, and a MST Survivor and Advocate –  Stephanie Schroeder.

She became an advocate in 2010 and with the launch of Cioca v. Rumsfeld, she came to the forefront as a national advocate for MST Survivors.

Stephanie has worked with many of our congressional leaders and senators such as Senator Gillabrand and Congresswoman Speier in an effort to change the way active duty and veterans get treated.

The Veterans Law Blog met her on Twitter – where we saw how strong of an advocate she really is.

The rest of this post was written by MST Survivor, Marine, and advocate Stephanie Schroeder:

How do you cope when VA attacks your credibility in a military sexual trauma claim?

I say don’t take it personally. VA tries to discredit everyone.

I know: at the moment that doesn’t make you feel any better, but give me a chance to explain.

When VA challenges your credibility it’s awful and it makes you feel bad. In essence, they  just called you a liar — or at least that’s how it feels. It’s very triggering and traumatic.

When they did it to me, I was devastated. They told me: “You have PTSD, but it came prior to service“.  This meant they were labeling me a personality disorder and then violating Title 38 3.304(b). This regulation  states pre-existing conditions cannot be used against the veteran if the veteran was cleared for service in the beginning.

(That’s your MEPS doctor screening at your entrance physical).

In other words, if the MEPS doctor didn’t cite your condition, it doesn’t exist for VA Benefits purposes and therefore cannot be used against you. (Cordell University- Law Department, 2012)

Fight Back against their Attacks on Your Credibility.

After you give yourself time to be really upset and cry about it, you have to get your head back in the game and look thru your file for evidence that proves your side.

If you don’t have evidence in your file, (a lot of files are missing evidence) then you have to think: “How can I prove this?”

You know why it looked different?

Because he was signing his statement when mortars came down range, causing his signature to be hurried and different.

How you fight the credibility attack depends on what  part the VA is attacking.

You have to remember VA‘s game is “deny till you die”.

The RO (Regional Office) your claim goes to plays a BIG role in whether or not you will get service connected.

By the way – here’s something you may not know: MST is not the medical condition you will request to get service connected for. You ask for service connection for Post Traumatic Stress Disorder (PTSD) due to MST (Military Sexual Trauma).

I typed MST with the understanding that everyone knows that the actual condition filing for is PTSD.

Another reason the VA attacks you: they learned how to in the military.

The belief among many Veterans is that the same rapists who served on active duty are using their Veterans hiring preference to get hired at the VA and are now working your rape case.

If that’s true, of course they are going to attack your credibility.

Not only that, but VA employees appear to have the same mentality  about rape and females from active duty: women alleging rape are just liars.

They are discriminating against us again –  except now they are trying to be slick.  At least in the military they openly attack you verbally and physically.

Be Ready for Retaliation.

I live in Chicago – my claim should have been handled out of the Chicago VA Regional Office.

Instead, the  VA sent my claim to St Paul. Why?

* For speaking out against them

* For being a national MST advocate

* For suing them in Cioca v Rumsfeld

* For going to the media (VA disproportionately approves combat PTSD but around 30% of all PTSD from MST claims versus 57% for combat. (Bhagwati, Park, Goldberg, Mammel, & Shah, 2013))

As females, we were immediately classed as second class citizens.

Right off the bat, we weren’t given the same opportunity as males, but instead forced to work twice as hard as our male counterparts and still not given the same recognition or awards that are given to the males.

Once we became Survivors, if we said something, we lost everything.

We became “that lying whore” which caused most of us to lose our careers.

The government and the VA both are aware of the rape problem within the ranks. However, in Cioca v Rumsfeld, the Department of Justice argued that the government was not liable because rape in the military is “incidental to the job” and is “an occupational hazard”.

In other words, the government argued that Survivors should have expected to be raped.

As military rape survivors, we are fighting an uphill battle.

We were discriminated against in service . Of course we are going to have to continue to fight for the benefits we are entitled to: it’s the same people from active duty.

The same ones that made fun of you called you names – even put you down or perhaps your actual rapist – is working your VA claim.

Just because our rapists left active duty doesn’t mean they stopped being rapists or that they had a morals change. That’s why it’s so important to fight for change about the prosecution levels within the military and having rapist labeled as sex offenders.

Otherwise, we Survivors continue to be discriminated against.

We aren’t just fighting rapists in the VA, I shouldn’t make it sound like that’s the sole reason our claims are getting denied. That’s not entirely true.

The entire truth is our former rapists works for VA now who then gives them nice bonuses for saving VA money. (Johnsen, 2013)

In other words, VA is more than happy to hire these people who make purposely make mistakes to/in our cases or do whatever they can to make sure we get denied.

That’s how they did my case – sent my claim to St. Paul RO even though I should have gone to the Chicago RO then broke the law by violating  38 C.F.R. 3.304(b) to deny my claim.

If they did it to me — a public figure  who they know will go tell everyone what they did — of course they are going to challenge your credibility.

I know it is very triggering and traumatic. It’s further continuation of what we experienced in service. Once we remember the context of who we are dealing with, it starts to fall into place.

My best advice is to not give up.

That’s exactly what VA is hoping for.

They hope you will give up and go away.

If you do give up, they don’t have to give you all that back pay and they have saved themselves money which means they have extra money to get rid of so they give bonuses to themselves at our expense. Remember what I’ve said and use it as your fuel to never give up.

Fight all the way until you go to the BVA board in DC and make sure you get a lawyer.

Make sure you get someone who is very knowledgeable in VA laws to fight for you.

The VA is not going to treat you fairly nor do they have your best interest at heart.

Sadly, as rape survivors, you will have to continue to fight for what is easily given to other vets. It feels personal because our trauma is personal, but in VA’s eyes it’s just another rite of passage if you will.