Understanding the 70 percent rating for PTSD.

Today I want to take a deep dive into the 70 percent disability rating for PTSD. It is at this rating level where the most severe symptoms of PTSD have begun to manifest.

I want to make 4 points to make from the beginning.

First, it is my hope that this information is able to help you if your are just starting to file a claim, seeking a rating increase for your PTSD, or are appealing a denial of a 70 percent PTSD rating in your veterans disability benefits appeal.

Second, this post also presumes that you have established PTSD – or any mental health condition – as a service connected disability. I talk elsewhere on the Veterans Law Blog® about how about how to establish service connection for your PTSD.

Fourth, while I talk about PTSD, this information generally applies to the rating for any mental health condition.

The Basic Criteria of the 70 percent PTSD rating.

A veteran rated at the 50% level for service connected PTSD is experiencing the manifestations of the cognitive deficiencies that are a hallmark of this condition. He or she is also experiencing an increased frequency, chronicity and severity of the mood-associated symptomatology.

But at the 70% level, things have become markedly more serious. Let’s take a look at the language of the 70% rating criteria:

“Occupational and social impairment, with deficiencies in most areas, such as work, school, family relations, judgment, thinking, or mood, due to such symptoms as: suicidal ideation; obsessional rituals which interfere with routine activities; speech intermittently illogical, obscure, or irrelevant; near-continuous panic or depression affecting the ability to function independently, appropriately and effectively; impaired impulse control (such as unprovoked irritability with periods of violence); spatial disorientation; neglect of personal appearance and hygiene; difficulty in adapting to stressful circumstances (including work or a worklike setting); inability to establish and maintain effective relationships………………………………………………………………………………………………………70%

Bottom line: the 70 percent PTSD disability rating is an important “jumping off” point. It is where the symptoms of PTSD have manifested into deficiencies in most areas of life: work, school, family, etc.

Let’s take a deeper look at 3 critical points you will need to know if you are trying to get a 70% VA PTSD rating.

#3: You don’t have to show every symptom to get the 70 percent PTSD rating.

There’s an old-technique that you will see in VA raters and BVA judges who have been around for a while. The technique is called “symptom-hunting,” and it works like this. A VA rater or BVA judge turns the PTSD rating criteria into a checklist, and looks for exact manifestations of the precise symptoms and the precise degree of symptoms. If you can’t hit every symptom, then you are given a non-compensable or the lowest possible rating.

A BVA decision with this kind of error in it will invariably be vacated by the Veterans Court. If your BVA decision includes “symptom hunting,” please reach out to a veterans benefits law firm that has experience handling PTSD rating increases at the Court of Appeals for Veterans Claims.

Thanks to a case known as Mauerhan, the practice of symptom hunting has been cast aside and rejected (for the most part).

The CAVC explained in Mauerhan that the symptoms listed for a PTSD rating are not meant to be an “exhaustive list.” This means that rateable symptoms need not appear on the list, and the list is not the only symptoms that can be considered. Instead, the symptoms in DC 9411 – the diagnostic code used for rating PTSD – are meant to provide examples of the type and degree of symptoms, or the effects they have on a veteran, that will support a particular rating.

You could have only one of the specifically listed symptoms for PTSD documented in your medical records, and still receive a 70% VA PTSD rating.

The key to establishing this rating is not showing all the symptoms, but showing that your symptoms present the same “picture” of the veteran described in the 70% rating criteria.

What does that mean? Well, read on….

#2: What are the Key Symptoms of a 70 percent rating for PTSD?

If you read through the 70 percent rating criteria for PTSD, and think of a person exhibiting those symptoms, you will get a sense of the type of veteran that will receive a 70% rating.

First, at the 70 percent PTSD rating level, we are looking at a veteran who lives his or her life in nearly continuous state of panic that limits the veteran’s ability to function independently or act appropriately.

The last part of that sentence is key: limits independent functioning and appropriate behavior.

But, through therapy and experience, and sometimes medication, we learn that being in that state of mind does not need to stop us from living through our day. We learn to temper our impulses, behave in ways that are more appropriate for a particular situation, and gain tactics to work through the panic attacks.

A friend of mine tells the story that when his PTSD was at its worst, he was in an auditorium at school watching his kid’s music recital. Out of nowhere, he was overwhelmed with panic – he just knew that everyone in the building was in danger, that something was going to happen. This place is not a safe place right now, he told himself. He began to sweat profusely, his heart was racing, and all he could think to do was to get out of the room. Before he knew it, he found himself hunkered down in a bathroom stall trying to figure out how to get back in the auditorium to get his family to safety.

The problem is – nothing happened. There was no threat in the recital hall. His family was safe.

Second, the 70% rating level is the first place in the rating of a mental health condition that we see mention of suicidal ideation. The VA will try to differentiate suicidal ideation from active planning. The VA, wrongly, believes that it is only taking action on your suicidal plans that qualifies you for the 70 percent PTSD rating.

These two symptoms are not the only symptoms that qualify you for a 70% PTSD rating. It is important to remember that these are merely descriptions of the holistic, overall, look of a veteran who is entitled to a 70% rating for PTSD.

In any claim or appeal, it is critical for the veteran or advocate to paint a picture of the frequency, chronicity, and severity of all the symptoms of the mental health condition you are experiencing.

Frequency: how often the particular symptom occurs. Does it happen five times per day, once a week, monthly, annually?

Chronicity: over what period of time do the symptoms occur? Have they been going on for a week, a year, 5 years?

Severity: paint a picture of how the symptoms affect you. If you experience obsessional rituals, instead of saying that you are scared to drive to work, explain (if it’s true, of course) that you walk 7 miles to and from work every day because when you sit inside a vehicle, you feel the car frame closing you in tighter or tighter.

#1: TDIU is commonly granted when a veteran has a 70 percent disability rating for PTSD.

Another distinctive feature of the 70 percent VA disability rating is that it is typically the stepping stone to a TDIU rating.

If you look at the picture of the veteran painted by the 70% rating criteria, you see a veteran who is likely struggling to get or keep substantially gainful employment. Think about it though. If you are experiencing intermittent, illogical speech patterns, are driven to act inappropriately due to panic attacks or depression, and are plagued by thoughts of suicide, it is going to be hard to get a job. And when those symptoms appear at work, it is going to be hard to keep that job. 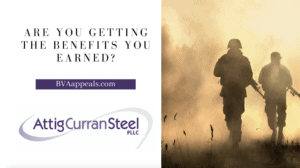 Here’s a resource for PTSD that I have found REALLY helpful.

When it comes to working through PTSD, leave no stone unturned. What works for one person may not work for another.

Some of us don’t respond to group therapy. Others find that medication is extremely intrusive in other areas of our lives. And still others of us are hopeful that the VA will get off its moral high horse or its obsession with opioids, and allow veterans to take advantage of the medicinal power of marijuana for the treatment of PTSD.

But, here’s a resource that I think any veteran can benefit from. It has become an important part of my weekly routine.

It’s called “PTSD Bunker Gear for your Brain,” and you can click on this link to find the website. What I really like about this site is the 3x per week podcast. In a short, 20 minute or less, podcast episode, the host covers practical tools that can help you cope with PTSD, depression or anxiety.

The guy that hosts the podcast is a Canadian firefighter, and he has a gift of breaking down how PTSD really affects us, and what we can do – today – to begin taking advantage of the condition to live a better and more fulfilling life.

You can find PTSD Bunker Gear for Your Brain on Facebook, as well. Tell Carl Waggett – the host – that Chris Attig sent you.

There is a closed discussion group, too, but I’ll let you find that on your own.

I hope this information helps you with your 70 percent PTSD rating from the VA.

Let me know, in the comments below, where you are getting stuck or where you need help.