A Profile in Advocacy: Melissa Bryant 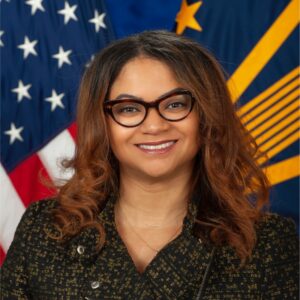 Melissa Bryant is no stranger to veteran advocacy groups.

She is a Black female US Army combat veteran from Philadelphia.  Formerly the National Legislative Director of the American Legion and Chief Policy Officer for Iraq and Afghanistan Veterans of America, she also has held leadership roles at the US Military Academy, Defense Intelligence Agency (DIA) and the Army’s Intelligence unit.  It is clear from her background and experience that she is a system insider with an activist agenda.

Ms. Bryant is well known for her activism, particularly for causes impacting women and minority service members.  However, in June 2020, while serving as the National Legislative Director of the American Legion- a veteran organization plagued by racism and sexism, her advocacy was not well received.  In June 2020, James W. Oxford,  National Commander of the American Legion, issued a statement condemning the protests that began after Minneapolis police officer Derek Chauvin brutally killed George Floyd. “America’s veterans, who witnessed horrific violence in theatres around the world, should not have to see the same death and destruction here at home.”  Oxford’s inadequate statement didn’t address any of the racial concerns at the for-front of the protests. Racial questions impact the millions of veterans of color who have served.

Ms. Bryant wrote to the Legion’s leaders asking that a new message be drafted that would meaningfully address racism stating: “We need to have a call to action to force the ‘uncomfortable conversations’, as well as acknowledge that we are also actively listening and learning.”  Ms. Bryant was quickly shut down by National Adjutant Dan Wheeler in an email stating, “I request that you remind any staff member calling for statements on George Floyd of how the American Legion is structured… no authority exists to weigh into this situation.”  His disapproval came despite The Legion affirming their 97-year-old anti-racism resolution in 2017.  Ms. Bryant later resigned. 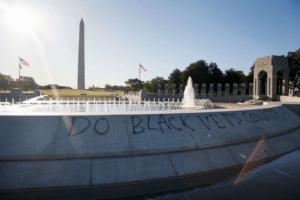 Spray paint that reads “DO BLACK VETS COUNT?” is seen on the World War Two Memorial on the National Mall in Washington, May 31, 2020, the morning after protests over the death of George Floyd. /AP

The American Legion failed to take a stand against racism in the US last year, but that wasn’t the only thing.

Another major contributor to Melissa Bryant’s departure from the Legion was its refusal to let her testify before Congress on issues that impact minority and women veterans.  Further, she was forced to take vacation time to independently work with Congress examining the MeToo movement in the military after Vanessa Guillen, a Latino soldier was sexually harassed before being brutally killed and dismembered by a male soldier at her Fort Hood base.

It is clear through this lack of involvement, that the American Legion’s mission and values don’t extend to the needs of minority veterans.  Too much involvement in the affairs of female and minority veterans could disrupt the white supremacy status quo that exists in its ranks.

Ms. Bryant’s activism and career has skyrocketed since leaving the American Legion.  In July 29, 2020, she testified before the Committee of Armed Services Subcommittee on Military Personnel at the US House of Representatives, urging for military justice reforms to end sexual harassment, retaliation, and accountability for perpetrators.  In her powerful testimony before the committee she warned,

Sexual Harassment in the military is not only an epidemic of fear, it is a national security risk… It compromises mission and personnel readiness by taking service members out of our combat-ready ranks emotionally, physically, and in SPC Guillen’s case- violently and permanently… those of us who are lucky enough to survive Military Sexual Trauma  (MST) stemming from permissive and pervasive hostile environments while in the military face uphill battles with the Department of Veterans Affairs once we take off the uniform and attempt to claim VA compensation and benefits for Post Traumatic Stress Disorder (PTSD) relating to MST.

In addition to compelling statistics, Ms. Bryant added her experience in supporting a former NCO who was a victim of MST and filed a claim for PTSD. Her demands are clear- “overhaul how victims can report harassment and assault prosecutions from the chain of command and making sexual harassment punishable as a specific offense within the Uniform Code of Military Justice.”

She ended 2020 even more outspoken about issues impacting minority veterans.

In December, Ms. Bryant was featured on Terrell Starr’s Black Diplomat podcast alongside veteran and activist Pam Campos-Palma where they discussed safety in the US and what it means as a minority female veteran.  She recalled the first time she was called the n* word while serving in the military, “you get reminded of your place, in the world order.”  But she never let it intimidate her inside or outside the institutions.

Even if we’ve been part of the institutions, I was with the American Legion, 100-year-old veteran service organization, very white, very conservative.  When you are fighting within a system or fighting against a system from the margins on the outside, all the groups you talk about on the inside-history has allowed us to live more of our authentic selves… the cost of that- is sometimes violence upon our bodies. I wear my skin, I wear my color, I wear my womanhood, I know there is tension…

In recalling the reasons why she left the American Legion, it is clear that the institution was hindering her ability to be an agent of change.  Pam later added that of all the threats to the American people, “White Supremacy is our [biggest] threat.”  All the organizations in the Big 6 that continue to protect the white supremacist way of doing business will continue to lose talented leaders like Ms. Bryant who have connections in Washington.  They will not survive with draconian operations, declining membership, and silence towards issues that impact minority veterans.

Melissa Bryant is truly a strategic activist on the inside.  In a February 18, 2021 VA press release she was appointed as the Senior Advisor for the Office of Public and Intergovernmental Affairs, and shortly afterward in March, she was named Deputy Assistant Secretary for the VA Office of Public Affairs. It will be interesting to watch as she continues to advocate for minority veterans from inside the VA itself.  With pressure on the new VA Secretary to diversify his cabinet, and talented Black women like Melissa Bryant climbing the ranks, can the VA become the microcosm of change?

We must make the hard decision to challenge institutions that do not confront with the wrongs in society if we want to be an agent of change.

It may seem like a career death sentence, but the reward is greater than the risk.  Today, Ms. Bryant is a voice to be acknowledged and listened to and her platform is growing every day.  This is the kind of leadership our veterans deserve.