What is a Real Veteran? 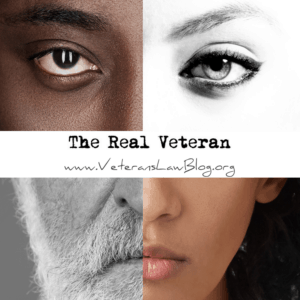 When you think about it, all veterans share one thing in common – and only one thing.

We served. In the past. Past tense.

The idea of the citizen soldier is older than our country. In peacetime, we are citizens. In wartime, we are called to serve. After our service, we return again to our life and our place as a citizen.

Veteran is synonymous with citizen, not soldier.

Have you ever noticed that when someone is trying to sell something to a veteran they use military imagery?

Start with ads by law firms seeking to represent veterans … they show soldiers, wearing their disability on their face, in a uniform just wrong enough to infuriate those who actually wore the uniform.

Banks trying to elbow in to the multi-billion dollar VA home loan racket by showing happy soldiers in uniform carrying their child across the threshold.

Don’t believe me. Google the word veteran. What images do you see?

One university advertises on Facebook trying to recruit veterans, using an ad that showed a young white man standing on a grassy ridge, a battery of civil war cannons stretching in a line behind him. What connection does today’s veteran – who is seeking a degree and a path to reintegration into civilian life – have to civil war cannons?

The American Legion made a commercial a few years back calling attention to suicide in the veteran community. The images they showed were of children holding pictures of the parent they lost to suicide. The picture of every parent was a soldier in uniform.

An airmen, in uniform.

A sailor, in uniform.

It was as if the dead had no civilian identity separate or distinct from the uniform they once wore.

Maybe it’s a failure of imagination. Maybe businesses and companies really don’t know how to market to the “veteran’s community.”

Think about how hard that is; we are all so different.

Even now – as citizens – we live such different lives. We shop at different stores. Wear different clothes to work. Celebrate holidays with different families. In reality, it’s impossible to market to veterans as a community. After all, we only share one thing in common – that we served. In the past.

A good argument could be made that corporations, politicians, the VA and the American public have created the image of what they think a veteran “should be,” because they can’t market to a community that shares next to nothing in common. Today. In the present.

What is that image? That brand?

The PTSD ravaged warrior to be pitied. The all American kid turned hero to be thanked. The faces we see to communicate that brand are invariably White. conservative. christian.

We veterans believed it.

We believed that to be a veteran, a real veteran some said, we had to keep a foot planted firmly in our military service.

The brand of veteran that has been burned into our identity doesn’t celebrate the veteran as citizen among citizens, but the veteran as a soldier among civilians.

If being a veteran means being tethered to the values and norms of our military branch, we can never leave the military behind. We can never lay down our weapons and pick up the tools of a civilian trade. We are expected to always remain tethered and true to what we did and who we were in the military.

If we cannot leave the military culture and values behind, we never fully heal our body, our heart or our mind. We never learn to thrive as American citizens contributing to the improvement of the world’s oldest democracy. In the end, by buying into that brand, that myth.

And for a price. We surrender our individual identity.

The current veteran brand decays one of the core values of our nation – that idea of the citizen-soldier.

Two days before Christmas in 1783, General Washington stepped into the statehouse at Annapolis, Maryland and surrendered his military commission to Congress. In front of the gathered body, the General said,

“Having now finished the work assigned me, I retire from the great theatre of Action—and bidding an Affectionate farewell to this August body under whose orders I have so long acted, I here offer my Commission, and take my leave of all the employments of public life.”

What would it mean for you to take leave of military life?

To finally retire from that great theatre of action?

Would you find your own identity – your authentic identity – as a citizen?

The Marine Corps has a saying: “Once a Marine, always a Marine.”

The saying engenders a bond of camaraderie and esprit d’corps that crosses time and battlefield to embrace all who served in the Corps.

It creates space for Marines past and present to join together to remember shared experiences, to mourn collective losses.

The saying serves the Marines well while in the Corps: the Corps is all that matters. You are doing something unique by putting your life on the line as a U.S. Marine.

But what does a saying like that do for us as citizens?

Is the Marine Corps helping us at 3 in the morning as we nurse a sick child? Is the Department of Defense teaching you how to balance work and family? Is your Ranger battalion helping you plan for retirement or patching your marriage back together?

Military sayings like “once-a-marine, always-a-marine” ensures we keep one foot in the past. A part of our identity anchored forever in the military.

Even if you’re not a Marine, you hear this message.

Ever heard some vet screaming that another vet “broke their oath”? Our oath, as a veteran, is in the past; we were released from that oath when we left service. This idea that, as citizens, we have taken any oath, is intended to anchor us in the norms and values of military service.

Real Veterans are Being Hidden Behind a Green Curtain.

As our nation again grapples with the consequences of building a society and culture on a foundation of centuries of slave labor, police brutality, and all manner of depredations of our Black citizens, most of us have been told to ignore our differences.

“We all wear green,” they lecture.

Except we don’t. That’s in the past.

And that’s a shame.

Because it is the unique lived experiences of a diverse citizenry that gives our democracy color and texture, stability and hope.

But all veterans, according to the saying, have to wear green.

If you don’t accept that value, you’re cast away from the veteran’s community. There’s no room for you. You’re not a …. “real veteran.”

There’s no room in the current veteran brand for the citizen who, upon leaving the military, came out to their civilian friends to tell them their gender assignment at birth doesn’t match their actual gender. That she would now liked to be called Andrea…that Andrew is a dead name.

There’s no room in that brand for the Black Marine who, upon leaving the military, is treated like a second class citizen on the streets of his hometown. Arrested, beaten, shot, targeted by police, denied home rental or ownership in white neighborhoods because his fellow white citizens see him as just another Black thug in a white world.

There’s no room in that brand for the woman who rails against the machinery of war and refuses to let her sons and daughters serve the Dogs of War.

I have lived nearly a quarter century of civilian life after my time in the Army.

I went to law school. I clerked at the Texas Supreme Court. I built a law firm with a national reputation. I wrote a book. I have run four marathons (so far). I married the girl of my dreams. I raised two boys and sent them both of to college to find their authentic selves. I am teaching my third and youngest child things that come naturally to most everyone else: how to talk, how to walk, and how to hold his head high when others speak derisively of his abilities and potential.

I’ve done a lot more in the 25 years I’ve lived as a citizen than in the 4 years I spent on active duty in the Army. My body, my mind, my heart and my soul have changed, matured and evolved since those years.

Yes, I still see the scars on my face every morning when I brush my teeth. I suit up to battle PTSD every single day. And because of the incessant ringing in my ears, I will never again know the sound of absolute silence.

Constant as those reminders of military service are, they don’t define me. Neither the good experiences nor the bad ones.

I don’t want to live my whole life being the kid I was for four years of active duty a quarter-century ago. What I did for just 4 of my 50 years on earth do not paint even a corner of the picture of who I am.

Yes, I look back with pride at my service. But it’s my pride, and it’s in my past. I’m a citizen, now, and it’s time to take pride in THAT.

Yes, our experiences in the military serve us well. Coming to grips with my failures in Ranger school has been one of the most powerful lessons I’ve learned in my life.

But that’s an intensely private and personal experience. Unique to me. It’s not something I need to be thanked for, pitied for, or remembered for. It’s part of my life experience, but it’s not part of my identity.

I’m a citizen who sees the power of – tirelessly – striving to fail.

I am a citizen, now.

Are YOU a Real Veteran?

Have you left the military, or do you have a foot anchored in your service?

Do you look to the military, or citizens, for solutions to your problems?

Do you still wear green? Do you believe that other veterans do?

How would your life – today – be different if you could retire from that Great Theater of Action that General Washington spoke of.

What would it look like for you to take your leave of all the employments of military service?

What would it take for you to shed the contrived obligation to be what others expect a “real veteran” to be?

I left the military and became a veteran so I could live as a citizen, not a soldier.

I took off the uniform, for good, so that I could become my authentic self.

Will you join me on the path to becoming a “Real Veteran”?