QUESTION: What is VA Reconsideration? ANSWER: A Can of Bulls**t. 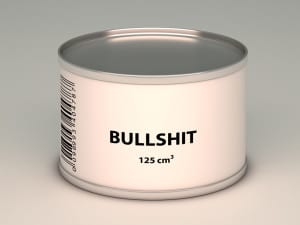 Remember all those pranks that NCOs used to play on newbies to the unit – particularly those butter bar 2nd Lieutenants that thought they knew it all?

“We’re out of Chem-lyte batteries, private, can you go to the Supply Sergeant and load up?”

Well, VSOs (Veteran Service Organizations) have their own version of this prank for unsuspecting Veterans battling the VA.

What is the Request for VA Reconsideration?

Who the hell really knows?

There is no such thing as a Request for VA Reconsideration.

Near as I can tell, the “Request for VA Reconsideration” is something that the VA and VSOs have concocted to ensure that Veterans miss appeal deadlines.

If you get a VA Ratings Decision that you disagree with, file an appeal (See next section for how an appeal is filed).

But even though it doesn’t exist, far too many VSOs often advise Veterans to file a “Request for VA Reconsideration” from an unfavorable Ratings Decision.

This is BAD advice.  Follow it at your own peril

If a Veteran disagrees with the Ratings Decision he or she should file an appeal….using the Notice of Disagreement VA Form 21-0958.

I’m going to tell you why….

A Veteran, who was the victim of of Military Sexual Trauma (MST) had a claim for benefits denied in an unfavorable Ratings Decision.

AMVETS – a Veterans Service Organization that represents a great number of Veterans – advised the veteran to request VA reconsideration “under the CRF 3.102 Reasonable Doubt.”

(I don’t have any clue what that means – its gibberish, “poser-lawyer” gobbledy-gook. The kind of thing someone says when they want to SOUND informed, without actually BEING informed. It’s like your bank telling you that it deposited your checks into an apple account for interesting people…..meaningless jibberish)

The veteran said that the AMVETS representative advised an appeal would “…take too long…” and VA reconsideration was “…the preferable response to the negative rating decision.”

So the Veteran went along with what the AMVETS representative advised.  Ultimately, no appeal was filed, and the rating decision became final.

Not unsurprisingly, the VA did not “reconsider” their decision.  They aren’t under any legal obligation to do so, so why would they?

The veteran is now at a significant procedural disadvantage and will have to reopen the claim.  Adding new and material evidence, in a Military Sexual Trauma claim, will be very difficult.  Oh – and the Veteran lost several years of past-due benefits because the effective date for a reopened claim is the date of the reopened claim – not the underlying original claim.

All that work for nothing – years of work.

Tens of thousands of past-due benefits, flushed down the toilet.   Because some AMVETS VSO Representative did what made him look good to the VA, without thinking of what was important for the Veteran.

This isn’t the first time a VSO screwed a Veteran out of money.  This VSO advises Veterans of the wrong filing timeline.  This VFW Representative actually TOLD the VA to disregard favorable evidence.

You may really like your VSO Representative – and that’s totally cool with me.

I apply the Ronald Reagan philosophy with VSO reps – after 2 VSOs told my grandmother (wrongly) that she was not entitled to any VA Survivor benefits after her husband died as a result of injuries sustained at the Battle of the Bulge in World War II.

Don’t get me wrong – there are some GREAT ones out there.  And there are a couple that my firm maintains tight relationships with.   But until your VSO can be proven to be one of the great ones, watch them like a hawk.

What is the PROPER Way to Appeal a VA Ratings Decision?

Within one (1) year of the date of the Notice of Action Letter delivering a VA Ratings Decision, file a Notice of Disagreement.

A Notice of Disagreement consists of 2 things:

2) Expression of an Intent to Appeal.

The VA wants all the Notices of Disagreement filed on this new form.  And I recommend that every Veteran include some very basic information in their Notice of Disagreement.

Where does the DRO Conference Fit into All This?

The DRO Conference – held by a VA Decision Review Officer – is usually done AFTER the Veteran has filed their appeal (Notice of Disagreement).

I am a big fan of the DRO process – with one exception, we have had a really favorable experience working with DROs to resolve claims and appeals.

Here are some factors you should consider when you request a DRO Conference.

And read how one Veteran approached a DRO Conference when the DRO told him that his issue was not actually on appeal.

How Do You Prevent a VSO from doing this to you?

I think there are a couple things you can do:

1) Know your own claim.  Get your VA C-File, study it, and know it better than your VSO Representative.

3) Learn the 8 Steps to Improving Your VA Claim – even if someone else represents you, following these 8 Steps will help you verify that they know what they are doing.

4) If you have any doubts about your VSO – ask around about them.  They usually have a reputation of being “cozy with the VA”, or fierce advocates for the Veterans they work with.

5) Hire an attorney instead of a VSO.  Why? If an attorney pulled any one of those stunts, above, you could sue them for malpractice and file an ethics complaint with their State Bar.

Take the time, though, to find the attorney that is right for YOU and YOUR claim – learn the 8 Things Every Veteran Should Know Before Hiring an Attorney in their VA Claim.

12/2015 Update: The M21-1MR was recently updated to reflect a “reconsideration” process – here’s what happens: you request reconsideration, and if the VA does anything, they  will send you a letter that you are required to file VA Form 21-526 for a new claim.  What they have done, effectively, is prove my point – this process exists only to REDUCE your past due benefits. Appeal the decision denying benefits.  If you use the tools on this blog, you’ll probably have a better experience and hopefully a better outcome.