What Can a Wrench Tell Us About Evidence at a BVA Hearing? 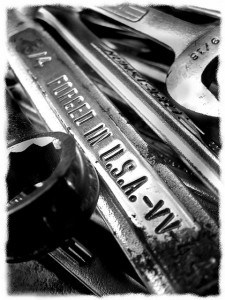 It takes evidence to win a VA Claim or appeal at BVA Hearing: there is no getting around that.

Different kinds of evidence are weighed differently by the VA Regional Office, the BVA and the Court of Appeals for Veterans Claims (CAVC).

To be precise, the CAVC doesn’t actually “weigh” any evidence – they just evaluate how it was weighed at your BVA Hearing.

Many Veterans struggle with the concept of “weighing evidence”.

While every Judge, Jury and lawyer is familiar with the concept, to the layman it can be a very difficult concept.

It is a vital concept to grasp: the burden of proof in most VA Claims turns on the weight of the evidence.

This is what the Courts mean when they say that the “Preponderance of the Evidence must show…”, or the “Greater weight of the evidence must demonstrate….”, etc.

At Your BVA Hearing, How Will the Hearing Officer Weigh Evidence?

In a sentence, he or she is looking for probative evidence that is relevant to a material issue in your case.

It is not at all a coincidence that these are 3 of the 5 Stars of Evidence.

So, a solid understanding of these “nebulous” legal terms-of-art can improve your ability to make a cleaner, more persuasive, and stronger presentation at your BVA Hearing.

Let’s take a look at what these 3 terms mean….

Material: Evidence which is of “consequence” to the issue being decided or fact in question.

Probative: Evidence which has a  tendency to make the existence of a material fact more – or less – probable.

Relevant:  Probative Evidence which has a tendency to prove – or disprove – a material fact.

To the lawyer, however, they are very distinct terms with nuanced meanings that tell us a great deal about a particular piece of evidence.

This does not necessarily work the other way around.  Both relevant and irrelevant evidence CAN be material and probative. But evidence cannot be probative unless it is also material.

See how tricky it can get?

Honestly, when this stuff is thrown at a law student in the second year, if they don’t have a drinking problem, this pushes them over the edge. Just kidding of course.

A Metaphor to Help You Understand the Weighing of Evidence.

My garage is a mess.

After years of “dress-right-dress” in the Army, you think it would be spotless and organized.

You would be wrong.

This can make it difficult to find the particular tool or part I need when working on my motorcycle.

Let’s say I need an Allen Wrench to remove a chrome cover on the bike.

I  grab all 3 of my cardboard boxes full of random tools (laugh it up, neat-freaks) and start sifting through looking for an Allen wrench.

Every time I have to do this, I get flashbacks to looking at VA Claims Files – they are often no more organized than my randomly packed boxes of tools.

If I was evaluating each tool like a Hearing Officer weighs evidence at BVA Hearing, here’s how I would make the analysis.

Question #1: Is the Evidence Material?

If, in sifting through my box of tools, I came across a spare oil filter, I would classify this part as not “material” – because it is in no way related to what I am looking for (a wrench).

As an aside…imagine the look on an experienced mechanic’s face when he finds an oil filter in a box marked “tools”….if you see THAT face on a BVA Hearing Officer, you are probably introducing immaterial evidence.

Question #2: Is the Evidence Probative?

Let’s say I found 2 wrenches: an Allen wrench and an adjustable crescent wrench.

They are both wrenches, and I’m looking for a wrench.

They are both “probative”.

What if I found a pair of vice grips?

Well, interestingly, since that tool COULD  be capable of doing the job of the wrench could do, and would be considered “probative”.

Question #3: Is the Evidence Relevant?

Let’s apply this knowledge in a “real world” scenario.

How to Use This Knowledge at your BVA Hearing.

Ideally, you want evidence that is probative of, and relevant to, a material issue in your VA Claim.

Let’s say you are trying to prove that your Sleep Apnea is secondary to your Post-Traumatic Stress. You have a (hypothetical) medical journal article from the New England Journal of Medicine that summarizes the result of a 5 year study of patients who had Post-Traumatic Stress and later developed sleep apnea.

You want to introduce this evidence at a BVA hearing to argue that your sleep apnea is secondary to your post-traumatic stress.

Here is how a BVA Hearing Officer  “might” weigh this evidence.

(I put “might” in quotes because there is good reason to believe that the BVA does NOT know how to weigh evidence either – take a look at the recent non-precedential Cerney Remand, which shows a classic example of a BVA Judge – or an inexperienced law clerk writing the decision for the BVA Judge – not understanding the concept of “weighing” evidence).

Is the Journal Article Material?

However, if the issue is whether or not the Veteran has actually been diagnosed with Sleep Apnea, the journal article is not material.

Is the Journal Article Probative?

This is the trickiest part.

Some BVA Hearing Officials use “probative” and “admissible” interchangeably. They consider evidence that is not probative to be inadmissible.

While this may in some cases turn out to be true, it is not always the case.

Yes, a hen will sometimes crow like a rooster.  If you remove an established rooster from a flock of hens, the dominant hen will frequently take over the role of the  rooster, including crowing.  I’m serious.  Saw it happen in my flock.  Freaked me out.

However, it is not always that easy.  The toughest call a BVA Hearing Officer can make is to determine the probative value of evidence.

Here is the question he or she ultimately has to answer: Does the fact that the New England School of Medicine Study (a hypotheticla study) suggests a link between PTSD and Sleep Apnea make it more or less likely that your Sleep Apnea is related to your PTSD?

I can see arguments both ways – but it will all turn on what conclusion is made in the journal article.

A conclusion that there “may” be a connection might lead me to argue against it having probative value.

If the conclusion was that there is a higher degree of correlation between PTSD and Sleep Apnea in the Veteran community, then I would argue more strongly in support of probative value.

Finally, is the article “relevant”?

Notice how we don’t get to the question of relevance until we’ve determined the “probative value”?  There is a reason.

Probative facts might be relevant, and they might not be. Or, they could be relevant, but prove the opposite conclusion than the one you want.

Remember the wrenches?  There are dozens – hundreds – of sizes of Allen wrenches. The only ONE that is relevant is the one you need for the bolt you are trying to remove.

The key to  relevance:  knowing the bolt you need removed (translation: knowing the precise fact you are trying to establish).

If probative evidence is less specific or more general, it is less likely to be relevant. The more specific, the better.

Bottom line – when introducing evidence at your BVA Hearing,  make sure it is Material, Probative, and Relevant.

Evidence can be confusing – I go into this in more detail in my 5-Star Evidence Field Manual (click here to check out this eBook).

What is equally as important as WHAT evidence you choose, is HOW you argue it to the VA.  Clean and concise writing based on facts and evidence you present improves the Veterans experience with the VA.

Whether you are a good or bad writer, my Get to the Point Writing training program can help you write more persuasively to the VA or the BVA>.